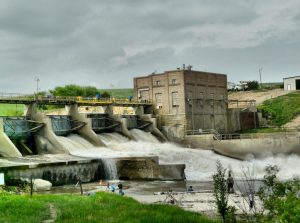 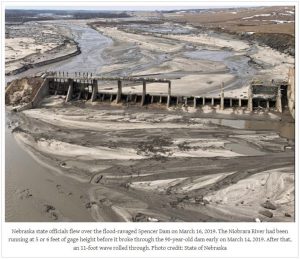 The town of Spencer, Nebraska is a small town of just 423 people, but on March 14, 2019, the town became more well known that it probably ever dreamed it could, or even wanted to be. Suddenly, Spencer, Nebraska was big news, or at least the dam there was. Events unfolded that lead to the collapse of the 93-year-old dam, when the pressure from an icy flood mixed with an area that had a history of unaddressed ice problems. Perhaps it was the rural area of the state, or that they misjudged the surge that could follow a collapse, but they didn’t think that many people would be affected and certainly that no one would die, should the Spencer dam fail. That proved to be untrue, when Kenny Angel, who lived just beneath the dam, was found dead after the flood washed away his home and business. Workers for the Nebraska Public Power District, which operated the dam, warned Angel just minutes ahead of time of the impending danger.

The dam was operated by the Nebraska Public Power District (NPPD). Heavy precipitation during the March 2019 North American blizzard led to a failure of the dam in the early morning hours of March 14th, causing heavy flooding downstream. For a dam that was not expected to do much damage, if it failed, the damage was really devastating…affecting four counties. An 11-foot wall of water was released by the failure, as recorded by a US Geological Survey stream gage moments before it was washed away.

Nebraska regulators had categorized Spencer Dam as a “significant hazard,” which is a rating that meant no loss of life was expected if it failed. With that, no formal emergency action plan was required. After the collapse, it was noted that the Association of State Dam Safety Officials said the dam should have been rated as “high hazard,” which could have led to a plan to modify it to increase its flood capacity. Unfortunately, that was not done, and the failure was terrible. Knox County, the hardest hit of the four counties affected, saw estimates of more than $17M in damages. While the Spencer dam had a history of ice related issues, and other dams may have had ice issues too, the Spencer dam might just be the first dam in the nation to collapse due to 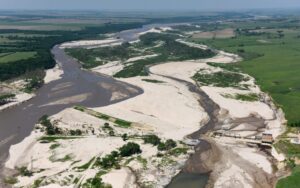 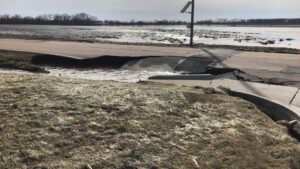 those ice issues. The 11-foot surge of water that followed the collapse took out roads, highways, homes, businesses, and bridges. For several months, motorists were required to detour 150 miles to get past the damage. The flood cut a new channel in the river, meaning a new 1050-foot section of the bridge on Highway 281 below the dam.