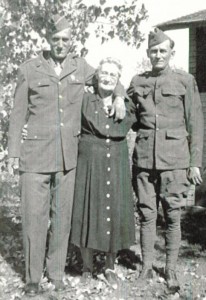 My grandfather and his brother, my Uncle Ted were born 14 years apart. There were, of course, other siblings who were born in between the two brothers. Still, these two brothers would be tied together for years to come…until my Uncle Ted passed away, in fact, because they would marry girls who were sisters. About June 5, 1917, when my Uncle Ted was about 10 years old, my grandfather was drafted into World War I. I’m sure Uncle Ted felt many things…fear and worry for his brother, and yet excitement and wonder over the big adventure his older brother would be having. I’m sure his mother was feeling some of the same things, although I doubt if she was excited at all. A boy of 10 years of age probably doesn’t totally understand the dangers, just the adventure, but a mother totally understands that her baby might not be coming back.

My grandfather did come back from the war, and for a time our world had relative peace, but before all of her sons were out of the necessary age range for the draft, World War II would break out, and another of her sons would be called to fight. Uncle Ted enlisted in the Army on January 28, 1944, and so it came about that my great grandmother would have two sons fight in two separate World Wars. I know many people have had more than one son fight in a war, and I’m sure that would be awfully hard, but equally hard would be the situation where you thought the rest of your sons had dodged a bullet, no pun intended, only to find out that it wasn’t so.

Great Grandma was very proud of her soldiers, as she was of all her children, and to remember their bravery in battle in two wars, they took a number of photos. I don’t know if these were before Uncle Ted went of to war, or later on, but I do know that my grandma was feeling either worry, or relief, because war is a very hard thing on those left at home. Still, my great grandmother sent her boys off to war, and prayed that they would come back home safely, and they both did.

It will always seem strange to me that my grandfather and his brother could have fought in two separate World Wars, but that is exactly what happened. This was something I had not realized until my mom told me. I had wondered since finding this picture, why the uniforms were so different, and now I know. They were brothers who fought in two separate wars, to separate eras almost, and yet, only 14 years apart in age. Sometimes things can change so quickly in our world. We can move from one war to another seemingly overnight. We look back a short way and think, “Wow!! Just a few short years ago, this or that was the reality, and now it’s all changed!”