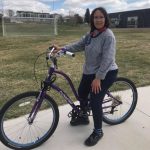 My sister-in-law, Brenda Schulenberg became quite ill a number of years ago, and finally had to face the fact that her weight was slowly killing her. I suppose some people might think that statement is harsh, but they don’t know my sister-in-law. Those were fighting words for her, or at least a call to action. When she found out that her weight had caused sleep apnea and congestive heart failure, she decided that she was not going to let her weight win. From that day forward, the world would see a new Brenda…a determined Brenda.

The road was long, and filled with hard work. Brenda doggedly walked in the cold early morning hours, rain or shine, and even in snow. She bought a bicycle, and fought hard 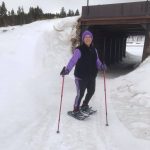 to master that skill again, even with knees that had to be retrained to bent enough to work the pedals. In fact, when she started, Brenda had to take the pedals off and strider the bike (basically run while seated on a bicycle). It was work, but she wanted to ride a bicycle again, and determination goes a long way toward success. These days Brenda can be found riding her bicycle most days at some point in the day. She loves the Platte River Trail, and often rides its entire length.

Not only has Brenda continued to follow her own health and fitness plan, but she has chosen to mentor others. She has made several trips to attend meetings in other towns to talk to their weight loss groups, even if they are not on Weight Watchers, like 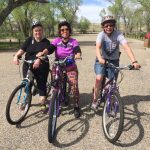 she is. She has put her name out there as someone who will buddy up with people who are struggling to lose weight to see if she can be on any encouragement or assistance. She is willing to go out and walk with them or ride bicycles with them too. She is so adamant about health, that she doesn’t want anyone to struggle with their health. I guess that since she has been on the unhealthy side of life, and the healthy side of life, and has chosen the healthy side of life, she wants others to be able to experience just how great it feels to be healthy…and she wants to help them to achieve their own health and fitness goals that have seemed so impossible to them. It is a noble calling. Today is Brenda’s birthday. Happy birthday Brenda!! Have a great day!! We love you!!