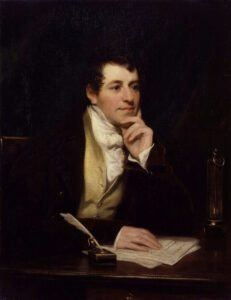 Underground mining, as we all know is dangerous. It was even more dangerous in the 1800s, when the equipment used was much more primitive. Still, many mining companies have switched to open pit mining to avoid the possibility of a cave in. One of the most dangerous forms of underground mining was and still is coal mining. The distinct possibility of a build up of methane gas makes underground coal mining a deadly venture for many miners. Aside from breathing the deadly gas and coal dust, causing death, either instantaneously or later in life…from black lung, the danger of an explosion was always present.

One of the most dangerous parts of underground mining, was the miner’s inability to see, or rather the lanterns used to solve the problem of the miner’s inability to see. It’s pretty difficult to maneuver around in a mine, much less find ore, if you can’t see, and caves don’t generally have built in lights. Miners these days have battery powered lights on their hard hats, but those things didn’t exist in the 1800s. Most generally the miners carried a lantern, filled with heavy vegetable oil and using a wick that was unprotected, thus allowing it to ignite the methane or other flammable gasses, called firedamp or minedamp, lurking undetected in the mine.

The problem needed to be solved, and so several inventors began looking into just how to do that. Probably the best one, at that time, was the Davy lamp. It is a safety lamp designed specifically for use in flammable atmospheres. It was invented in 1815 by Sir Humphry Davy. They didn’t have light bulbs or batteries that could be used in the mines back then. The Davy Lamp consists of a wick lamp with the flame enclosed inside a mesh screen. The mesh screen kept the flame from escaping, thereby reducing the danger of explosions. The Davy Lamp also provided a test for the presence of gases. If flammable gas mixtures were present, the flame of the Davy lamp burned higher with a blue tinge. The lamps were equipped with a metal gauge to measure the height of the flame. When the lamp was placed close to the ground, it could detect gases, such as carbon dioxide, that are more dense than air and so could collect in depressions in the mine. If the lamp determined that the mine air was oxygen-poor (asphyxiant gas), the lamp flame would be extinguished, using a black damp or chokedamp. A methane-air flame is extinguished at about 17% oxygen content…which will still support life, so the lamp gave an early indication of a dangerous atmosphere, allowing the miners to get out before they died of asphyxiation.

Apparently, Davy’s invention was preceded by that of William Reid Clanny, an Irish doctor at Bishopwearmouth, who had read a paper to the Royal Society in May 1813. The Clanny lamp was more cumbersome, but it was successfully tested at Herrington Mill, and he won medals, from the Royal Society of Arts. Another lamp version was the lamp designed by engine-wright George Stephenson. His “Geordie Lamp” drew air in via tiny holes, through which the flames of the lamp could not pass. If you ask me, the metal plate, only allowing small pin points of light would not be a very illuminating. A month before Davy presented his design to the Royal Society, 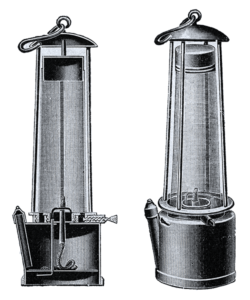 Stephenson supposedly demonstrated his own lamp to two witnesses by taking it down Killingworth Colliery and holding it in front of a fissure from which firedamp was issuing. Unfortunately for Stephenson, Davy beat him to the necessary people.

The first trial of a Davy lamp with a wire sieve was at Hebburn Colliery on January 9, 1816. Because of its success, Davy was awarded the society’s Rumford Medal. Davy’s lamp differed from Stephenson’s in that the flame was surrounded by a screen of gauze, whereas Stephenson’s prototype lamp had a perforated plate contained in a glass cylinder, which was a design mentioned in Davy’s Royal Society paper, as an alternative to his preferred solution. For his invention Davy was given £2,000 worth of silver. Stephenson, on the other hand, was accused of stealing the idea from Davy. His “Geordie Lamp” had not been demonstrated by Stephenson until after Davy had presented his paper at the Royal Society. While Stephenson was exonerated, Davy went to his grave insisting that he had tried to steal his idea.