A Rock In Time 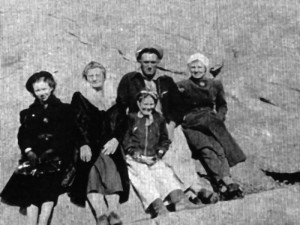 You don’t grow up in central Wyoming without making at least one and more likely several trips to Independence Rock. It is a favorite for school field trips, and family outings as well…or at least it was when I was growing up. My family has climbed all over that rock looking at the names of the immigrants who passed by their on their way west. They would carve their name in the rock, as a way of saying, “I was here, in this place, on this date in history.” They had no way of knowing if anyone would ever see their name or care to wonder about who they were, but they wanted to mark their presence in time anyway. Lots of people have done that over the years, although these days people often use spray paint on the rocks or walls of a place, or even a sharp object on the stalls of a bathroom, which I have never been able to figure out. I mean, who cares about that. It’s just weird. Of course the difference is that the people who do that now are looked on with disdain, for defacing public property, but the immigrants heading to the old west were viewed as pioneers making their mark in history. I have to agree with that analogy, because graffiti is not like a historical record carved into a rock after all.

Independence Rock is located in southwestern Natrona County along Highway 220, a little 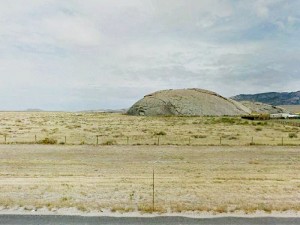 over 55 miles from Casper, which is why many Casperites have been there so many times. It is a huge granite rock approximately 130 feet high, 1,900 feet long and 850 feet wide. It basically sticks up in the middle of an otherwise quite flat area on the prairie, with the mountains in the distance. I suppose that was why the pioneers decided to carve their names there. After a long day of travel, it was a good place to camp, with one side well protected and a great place to keep a watchful eye out for Indians or outlaws. The children could play on the rock, and that would put them out of their mothers’ hair while dinner was prepared. Some people say that it looks like a huge whale in the middle of the prairie, and I can say I must agree. Because of all the names carved in the rock, it was dubbed “Register of the Desert” by Peter DeSmet in 1840.

Independence Rock was a favorite place to go rock hunting as far as my Grandpa George Byer was concerned, and the family went there quite a bit. It wasn’t a historical site then. Now, it is illegal to take rocks from that area, of course Grandpa would have never taken anything that had a name carved in it anyway. I’m sure that many of his kids have passed that tradition on to their kids, although, I don’t think many of the grandchildren take their kids there much anymore. It’s not that we wouldn’t think Independence Rock is interesting, 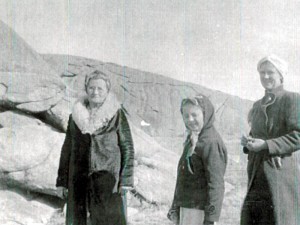 because I think many of us would, except that for a time you weren’t allowed to climb the rock to see the names recorded there. It was a little glitch in people’s thinking I think, and it made Independence Rock a lot less interesting to this generation. The time when climbing on the rock was prohibited came about because they didn’t want footsteps to kill the lichen, but I think they have changed that now, because the lichen was obscuring the names, and defacing the rock in it’s own way. I don’t go there much these days, but it will always hold a place in my memory files, because of all the fun we had there when Dad would take us to learn about history.