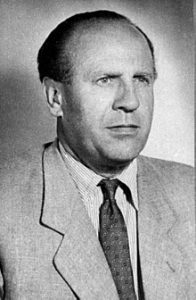 We have all heard of the atrocities that took place in Nazi Germany regarding the Jewish people. And many people might have seen the movie called Schindler’s List. When the movie came out, I did not have a real interest in the old war movies, but I really should have in this one, because it is not your typical war movie. The movie documents the actions of a member of the Nazi Party, who saw something that was morally wrong, and did something about it.

Schindler wasn’t what would be considered a moral upstanding citizen to the Christian way of thinking. He married Emilie Pelzl at nineteen, but was never without a mistress or two. When his family’s business went under, he presided over the the proceedings, and then became a salesman when opportunity came knocking in the form of the war. Schindler was never one to miss a chance to make money. He saw opportunity in Poland, so he marched in on the heels of the SS. Soon, he was deep into the black-market and the underworld..making friends with the Gestapo officials along the way…softening them up with women, money and illicit booze.

It was his newfound connections that helped him acquire the factory in Krakow during the German occupation of Poland, which he ran with the cheapest labor around…namely the Jewish people from the nearby Jewish ghetto. Schindler was a hard man, and didn’t care much about others, but somewhere along the line, something changed. When the Nazis decided to liquidate the ghetto, he persuaded the officials to allow the transfer of his workers to the Plaszow labor camp. I’m not sure what they workers thought of that situation right away, but in the end, to saved them from deportation to the death camps, for which they were grateful. 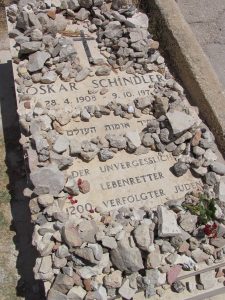 By 1944, Hitler had become more and more crazed, and all the Jews at Plaszow were to be sent to Auschwitz, but Schindler couldn’t bear to see his workers murdered by Hitler. Schindler decided to take a huge risk, and bribe the officials into allowing him to keep his workers and set up a factory in a safer location in occupied Czechoslovakia. Miraculously, they agreed to let him have his workers, probably thinking of the factory’s production, and not the fact that these Jews would not meet the horrible fate awaiting them in the death camps. So, Schindler gave them a list of his workers, and of course, that is where the name of the movie came from. By the war’s end, Schindler was penniless, but he had saved 1,200 Jews. And that makes him a very rich man, indeed. In 1962, he was declared a Righteous Gentile by Yad Vashem, Israel’s official agency for remembering the Holocaust. Oskar Schindler died on this day, October 9, 1974, and according to his wishes, he was buried in Israel at the Catholic cemetery on Mount Zion.