In 1998, two Argentine mountaineers climbing Mount Tupungato, which is about 60 miles west-southwest of Mendoza, and about 50 miles east of Santiago, made a strange discovery emerging from the glacial ice. Upon inspection, the “discovery” turned out to be the wreckage of a Rolls-Royce Merlin aircraft engine, along with twisted pieces of metal and shreds of clothing. It didn’t take long to realize that a plane had crashed here, but when and how did that plane crash at an elevation of 15,000 feet, into the Tupungato Glacier.

The find set off an Argentine Army expedition in 2000, during which additional wreckage was found, including a propeller and wheels (one of which had an intact and still inflated tire). The expedition also noted that the wreckage was well localized, which is indicative of a head-on impact with the ground, ruling out a mid-air explosion. In addition to the plane, the expedition found human remains, including three torsos, a foot in an ankle boot, and a manicured hand.

On August 2, 1947, a plane known as the Star Dust, operated by British South American Airlines, took off from Buenos Aires, Argentina, headed for Santiago, Chile. It never made it. After 51 years, the fate of the Star Dust was finally known, but how did it happen? A recovered propeller showed that the engine had been running at 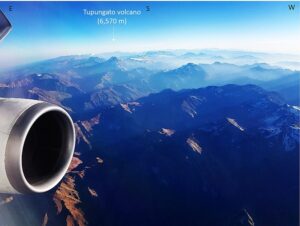 near-cruising speed at the time of the impact. The planes wheels were in a retracted state, meaning that the plane wasn’t coming in for a landing, emergency or planned. This was a controlled flight into terrain, whether planned or unplanned. It was determined that during the final portion of Star Dust’s flight, there would have been heavy clouds blocking the visibility to the ground. It is thought that because of the cloud cover and the resulting absence of visual sightings, that a large navigational error could have been made as the aircraft flew through the jet stream. This would not have been understood in 1947. High-altitude winds can blow at high speed in directions different from those of winds observed at ground level. If the airliner, which had to cross the Andes Mountain Range at 24,000 feet, had entered the jet-stream zone, which in this area normally blows from the west and south-west, resulting in the aircraft encountering a headwind, this would have significantly decreased the aircraft’s ground speed.

If the crew thought their airspeed was faster than it actually was, the crew may have deduced that they had already safely crossed the Andes, and so commenced their descent to Santiago, when in reality they were still a considerable distance to the east-north-east and were approaching the cloud-shrouded Tupungato Glacier at high speed. That theory is not well received by some BSAA pilots, who have expressed skepticism. They were convinced that Cook would not have started his descent without a positive indication that he had crossed the

mountains, they have suggested that strong winds may have brought down the craft in some other way. One of the pilots recalled that “we had all been warned not to enter cloud over the mountains as the turbulence and icing posed too great a threat.”

A 2000 Argentine Air Force investigation cleared Captain Cook of any blame, concluding that the crash had resulted from “a heavy snowstorm” and “very cloudy weather,” as a result of which the crew “were unable to correct their positioning.” By 2002, the bodies of five of the eight British victims had been identified through DNA testing.