A Record In Time 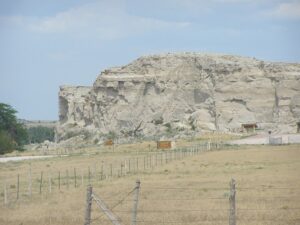 I have lived in Wyoming since I was three years old, and so sometimes it’s easy for me to forget some of the places that have great historical value, but they are not as well known as some of the other places, like Yellowstone National Park. Register Cliff is one such landmark that I don’t often think about, although I have been there, and it really is a cool place.

Register Cliff is a sandstone cliff, that is located on the Oregon Trail. The cliff is a soft, chalky, limestone wall rising more than 100 feet above the North Platte River. When my sisters and I were kids, our parents would take us on trips, and point out every (and I mean every) Oregon Trail marker that we passed. In Wyoming, that is a lot of markers. As the emigrants made their way on the Oregon Trail, searching for a better life in the west, they came upon this cliff and chiseled the names of their families on the soft stones of the cliff. It was one of the key checkpoint landmarks for parties heading west along the Platte River valley west of Fort John, Wyoming which allowed 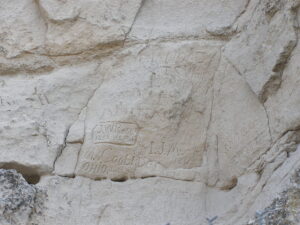 travelers to verify they were on the correct path up to South Pass and not moving into impassable mountain terrains. Geographically, it is on the eastern ascent of the Continental divide leading upward out of the great plains in the eastern part of Wyoming.

The practice soon became the custom of the day, and the other northern Emigrant Trails that split off farther west such as the California Trail and Mormon Trail began to follow the custom too, inscribing their names on its 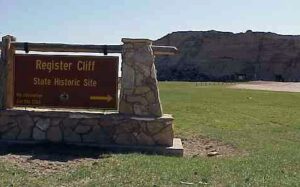 rocks during the western migrations of the 19th century. It is estimated that 500,000 emigrants used these trails from 1843–1869. Unfortunately, up to one-tenth of the emigrants died along the way, usually due to disease and other hazards. Nevertheless, those who made it this far were forever known to those who stop by. Register Cliff is the easternmost of the three prominent emigrant “recording areas” located within Wyoming. The other two are Independence Rock and Names Hill. The site was where emigrants camped on their first night west of Fort Laramie. The property was donated by Henry Frederick to the state of Wyoming, to be preserved. Register Cliff was listed on the National Register of Historic Places in 1969.