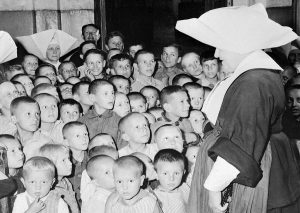 During the years of World War II, so much destruction brought with it the loss of jobs and homes. Along with the loss of jobs came poverty for many people. The smallest necessity became a “luxury” to people who had no problem making a living before. Many children were caught in the post-war poverty, because they lost their parents in the war. The orphanages were filled with children who were still in a daze, and trying to learn to be pretty much on their own, while still under the supervision of the state. I can only imagine how these little ones must have felt. Their parents were gone, they were grieving, and they were tossed into a strange building with many other children, all in the same boat. I’m sure the people running the orphanage did their best to comfort the children, but there were just so many of them.

I’m sure that joy was stranger to most of the children. And I’m sure that the people who cared for them were looking for any way to put a smile on the faces of the children. Little did they know, how such a small thing as shoes, could change everything. They found out, when the Junior Red Cross in the United States of America put together boxes of what most of us would consider necessities to give to the children in Europe.

One six year old Austrian boy named Werfel, was photographed when he got a new pair of shoes at the Am Himmel orphanage, donated to him in the Christmastime care box. The picture taken of little Werfel, was enough to bring tears to the eyes of anyone who saw it. They may have been happy tears, but they were highly emotional tears nevertheless. Most kids these days, would be almost disappointed to receive a pair o shoes as 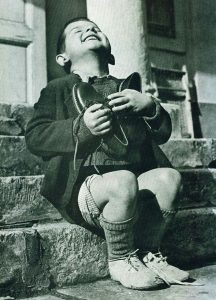 a gift…unless they were the latest in cool shoes. Little Werfel was beyond happy. He held the shoes to his chest and looked to the sky, as I he couldn’t possibly contain his happiness. The photographer probably took the picture through tear filled eyes. I know that’s what I would have done as the photographer. It was impossible not to be filled with emotion. “The photograph was first published in LIFE magazine on December 30, 1946 (on page 22) and later, again, on September 24, 1951 (on page 180). The photograph was shot by Gerald Waller, in 1946, and was titled “New Shoes”. The little boy, Werfel, was among the children who were brought to the USA after being deported from Israel / Palestine, where they arrived after liberation from the concentration camps. The image was published with the following caption in the 1946 issue. “EUROPE’S CHILDREN – Christmas brings joy and sadness.”

It was said that, “For many of Europe’s children there was a Santa Claus this Christmas. When a big box from the American Red Cross arrived at Vienna’s Am Himmel orphanage, shoes and coats and dresses tumbled out. Like the youngster (in the picture), the children who had seen no new clothes throughout the war smiled to high heaven. But for thousands of other European children there was no Santa Claus. When a boatload of illegal Jewish immigrants arrived at Haifa, Palestine recently, two Polish children (opposite) got separated from their parents. Tears filled the eyes of the boy, and his wan sister clutched him protectively. They were later reunited with their parents, but the whole family was shipped to Cyprus.”

The picture has stayed in my memory since the first time I saw it. To see that little boy so overjoyed…over shoes, was so beautiful. The photographer caught the picture perfectly. That moment was very likely one of the first truly happy moments that little boy had felt in quite some time. An adult, no matter the need would never 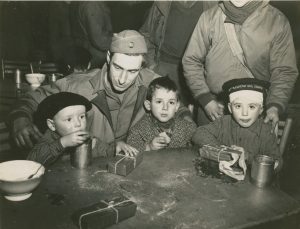 have shown such deep joy, probably because they would still be wrapped up in the poverty of the time, while the child was able to look beyond all that,and see the pure joy of the gift. The child could simply enjoy and cherish what has just been given to him, even though he was living in an orphanage…even though historical events had just unfolded,robbing him of his comfortable life…even though these were hand-me-downs. It made no difference to this boy, and it reminds us of how flawed our thinking is. We tend to look at the negatives in life and focus on them. Not this boy. He was happy with the tiniest positive thing that came into his life. It’s a lesson we should all learn. Sometimes we all need to appreciate the little things in life.