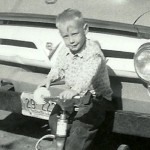 For many people, today might not necessarily mark anything so special, but for my husband, Bob Schulenberg, this is a good day. He was just a little boy of four years and three months, and didn’t know a thing about this at the time, and probably wouldn’t have cared if he had known, but down the road twelve years or so, he would have cared. Even when he did care, he wouldn’t have known the exact date or anything. I know, you wonder what in the world I am talking about. Well, it’s the El Camino. I just found out that the car Bob always wanted was first introduced on this day, October 16, 1958.

For a four year old Bob, that day held no significance, and even now, he doesn’t know that this is the 56th anniversary of the El Camino…but he soon will. I don’t recall just how long we owned our El Camino, but it was a long time, and it was definitely Bob’s vehicle. The seat would not go far enough forward for me to easily drive it, so I only did so when it was absolutely necessary. Needless to say, while it was one of Bob’s favorite cars, it really wasn’t mine. I don’t like to have my driving experience be a lot of work for me.

At the time of its introduction by Chevrolet, the El Camino was considered a car-truck hybrid vehicle. That is rather comical to me. A hybrid!! Really!! It was apparently inspired by the Ford Ranchero which had been on the market for two years at the time of the El Camino’s debut. They said it “rides and handles like a convertible, yet hauls and hustles like the workingest thing on wheels.” It may have been a good hauler, but in my opinion, it was nothing like a convertible, and I’ve had one, so I do know.

The El Camino didn’t really catch on, and the model built on an Impala chassis was discontinued in 1960. It was re-introduced in 1964 on the Chevelle frame, and in 1968 they upgraded to the SS version which made it a 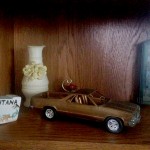 sport truck. With these changes, the El Camino became one of the iconic muscle cars of the late 1960s and 1970s. It seems every guy wanted one of the newest models. I guess you had to be a guy to appreciate it so much. The El Camino was dropped permanently in 1987, and while Pontiac thought about re-introducing it in 2008, their financial difficulties cause that to be dropped from the plan in 2009.

I’m glad Bob got to have the car-truck of his dreams, even if it wasn’t my very favorite, but I can’t say that I was sorry when he sold it. It had done its duty, and served its purpose, but it was time for him to have a real truck. I can’t say I like driving his pickup either, but as long as he’s happy with it, I’m happy too. Here’s to the El Camino…1970s muscle car, and the car of a little boy’s dreams.