To Visit The Queen

The New World (later the United States of America) was a pretty rough place in 1710. Great Britain owned a small portion of the whole of the New World, and the rest was often vied for against the French and other nations. That year, the mayor of Albany, New York, Pieter Schuyler, arranged a meeting between Queen Anne and five Indian Kings who wanted to request her aid, militarily. The Four Indian Kings or Four Kings of the New World were three Mohawk chiefs from one of the Five Nations of the Iroquois Confederacy and a Mahican of the Algonquian peoples. Five chiefs set out on the journey, but one died in mid-Atlantic. The three Mohawk Kings were Sa Ga Yeath Qua Pieth Tow of the Bear Clan, called King of Maquas, with the Christian name Peter Brant (grandfather of Mohawk leader Joseph Brant); Ho Nee Yeath Taw No Row of the Wolf Clan, called King of Canajoharie (“Great Boiling Pot”), or John of Canajoharie; and Tee Yee Ho Ga Row, meaning “Double Life”, of the Wolf Clan, also called Hendrick Tejonihokarawa or King Hendrick. The Mahican chief was Etow Oh Koam of the Turtle Clan, mistakenly identified in his portrait as Emperor of the Six Nations. The Algonquian-speaking Mahican people were not part of the Iroquois Confederacy.

When the kings arrived in London, they were treated like diplomats. They were transported through the streets of the city in Royal carriages and received by Queen Anne at the Court of Saint James Palace. They visited the Tower of London and Saint Paul’s Cathedral as well, and they got to tour and do things all over London to honor their visit. They watched a review of the Guards in Hyde Park, visited the Banqueting House and Chapel at Whitehall, and they were taken on the Queen’s barge to Greenwich Hospital and the Woolwich Arsenal, where they heard a saluting cannonade. They listened to sermons in the city’s churches. They were guests of 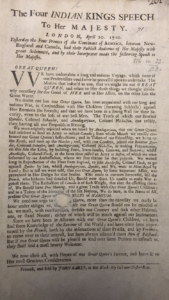 honor at a dinner hosted by the Board of Trade and were privately entertained by William Penn at the Taverne du Diable at Charing Cross. They attended a performance of Powell’s Marionettes at Punch’s Theater; a presentation of Macbeth where they got to sit on the stage. I’m sure the people of the city were quite curious about these “wild men” who had come to their city. Their clothing was so different from the sophisticated garb that was normally seen gracing the royal carriages. Still, the Indians were probably wearing their finest clothing too, and in the New World, it was probably top of the line. The queen wanted to commemorate the diplomatic visit, so the Crown commissioned Jan Verelst to paint the portraits of the Four Kings. These paintings hung in Kensington Palace until 1977, when Queen Elizabeth II had them relocated to the National Archives of Canada. She unveiled them in Ottawa.

The four kings were quite a spectacle in London, they were all described in a contemporary pamphlet as being in shape, muscular and within an inch or two of being six feet tall. Their complexions were described as being brown and their hair long and black.” Their visages are very awful and majestick, and their features regular enough, though something of the austere and sullen.” Their faces are covered in art, probably meant to inspire terror during battle. They are described as polite, they will not refuse any drink or food that is offered to them. They loved English beef more than any other kind of food offered to them. The people of London also described them as healthy. “Their health is good, as is proper for primitives; they know no gout, dropsy, gravel, or fevers.”

While I’m sure the big city was awe inspiring for the Kings, they were really there on a mission…to requesting military aid for defense against the French, and the chiefs to ask for missionaries to offset the influence of French Jesuits, who had converted numerous Mohawk to Catholicism. When they met with Queen Anne the court was mourning for the death of the Prince of Denmark, so the four Indian Kings were dressed in all black attire when they met with her. Their address to her was read, they asked for military assistance and missionaries to lead them to “true religion.” After the reading, the chiefs presented the queen with several belts of wampum to signify their meeting. In return for the gifts of the wampum, the queen gave them a set of communion plates, with the royal cipher and coat of arms, for a future Mohawk chapel. (These are now divided between the Mohawk reservations at Brantford, Ontario, and Tyendinaga, near Kingston.) The Archbishop of Canterbury gave each of the chiefs a Bible bound in Turkey-red leather. When she heard their request, Queen Anne informed the Archbishop of Canterbury, Thomas Tenison. They authorized a mission, and Mayor Schuyler 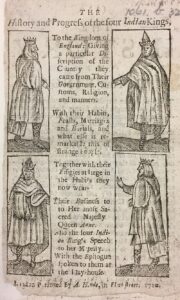 had a chapel built the next year at Fort Hunter (located near the Mohawk “Lower Castle” village) along the Mohawk River. The queen also engaged the four men in conversation through their interpreter, Peter Schuyler’s brother, John. Queen Anne was very generous to the Kings and their people, sending a gift of a silver Communion set and a reed organ. The Mohawk village known as the “Lower Castle” became mostly Christianized village in the early 18th century, unlike the “Upper Castle” at Canajoharie further upriver, where there was no mission founded until 1769, when William Johnson, British agent to the Iroquois, built the Indian Castle Church, which still stands today.

During their visit to London, the Kings were lodged at The Crown and Cushion, in King Street, Covent Garden. Here they slept on beds for the first time and became accustomed to them. Thomas Arne was their host, he was an inn keep and an upholsterer, he was very kind and considerate to his visitors. Because of this, the Indians renamed him Cataraqui in a Mohawk christening ceremony. Cataraqui was the fort that has now become the city of Kingston, Ontario. I’m sure that they really missed those beds when they returned to the New World in May of 1710.