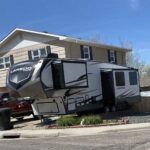 My brother-in-law, Mike Stevens and my sister, Alena Stevens, have done a lot of camping over the years. They have had had a number of camper trailers, but this year, they decided to get the one they really wanted, after all, Mike’s retirement is coming up soon…not that I know when, but he is closer to retirement than he ever was, and according to his son, Garrett Stevens, it can’t come soon enough. Mike and Alena have lots of summer plans in the works. They are planning camping trips on the mountain, very likely both the Big Horns and Casper Mountain, as well as at the Pathfinder Reservoir where the Stevens Clan take yearly vacations with the whole Stevens family. That said, they bought a 2021 Keystone Laredo 5th Wheel trailer. It is beautiful and it will definitely take their camping comfort to the next level.

Mike is a major green thumb. He loves growing things, and that means making sure they have a wonderful lawn. Their yard, both front and back and great entertaining spots, but that is just the tip of the iceberg when it comes to what Mike can grow. Their daughter, Michelle Stevens tells me that her dad has “quite the green 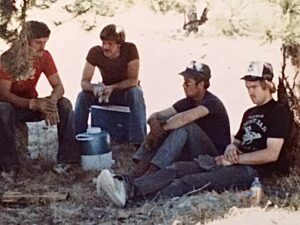 thumb.” Their summer garden usually contains tomatoes, cucumbers, and peppers. By the end of the growing season Mike and Alena have much work to do, because the harvest is always good. They busily can the vegetables, as well as the spaghetti sauce, that is Mike’s specialty; and Alena’s is her salsa.

Interestingly, Mike’s son Garrett came across a couple of “blast from the past” pictures of his dad that I find very interesting Mike used to work at Shellabarger Chevrolet, where Mike worked as a mechanic. In fact, that is where Mike met my sister, Alena…and the rest, as they say, is history. They have been married for 37 years this July 21st. You just never know where you will meet your soulmate. The other picture Garrett found is one with Mike and his buddies, Lloyd LaFave, Ron Millay, and Eddie Bright. What shocked me so much with this picture was just how much Mike and Garrett look alike. I knew Garrett looked a lot like his dad, but somehow, until you see a picture that clearly could be one person, but is actually the other, you just don’t make the connection in your mind. They could be twins…which wouldn’t be so odd, since Mike is a twin with his brother, Pat. Nevertheless, Mike and Pat are fraternal twins, and Garrett is actually more a twin to his dad than Pat is. 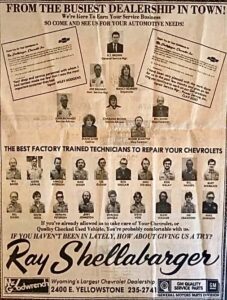 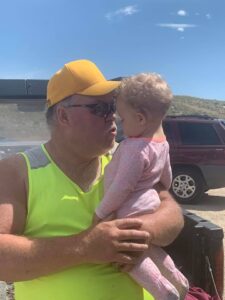 Mike and Garrett are planning some fishing for the summer, as golfing, of course. They both love golf, and this year they plan to golf at least once at the Powder Horn Golf Club in Sheridan, where Garrett and his family live. Mike and Alena plan to spend quite a bit of time in Sheridan, since that is where their first grandchild, granddaughter, Elliott lives. She is the apple of their eyes, and the just can’t get enough of her. Elliott, for her part, is a total character, and keeps her parents, Garrett and Kayla Stevens and grandparents, Mike and Alena Stevens and Wes and Lynette Smiley in stitches. Life just doesn’t get any better!! Today is Mike’s birthday. Happy birthday Mike!! Have a great day!! We love you!!