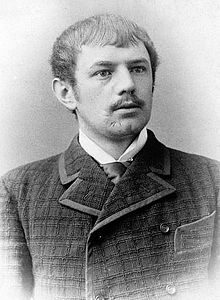 Hitler was undoubtedly one of the most horrible dictators of all time, but what prompted him to become the evil man he was. The story actually begins before Hitler was even born. In 1868, a baby named Dietrich Eckart was born in Neumarkt, Germany, on March 23, the son of a royal notary and law counselor. My guess is that he had a fairly normal childhood…at least until his mother died when he was just ten years old. That may not seem like an event that was unique to Eckart, but somehow it was different, or would become different. Eckart’s life was further complicated when his father died seventeen years later in 1895. At this point, Eckart inherited a considerable sum of money, and started to study medicine in Munich. That would be the last of his somewhat normal life. He spent his father’s money very quickly, and recklessly.

With his money gone, Eckart quit school, and began work as a poet, playwright, and journalist. He moved to Berlin in 1899, where he wrote a number of plays, often with autobiographical traits. Apparently, he was about the only one interested in his plays, because despite becoming the protegé of Graf Georg von Hülsen-Haeseler, the artistic director of the royal theaters, he never was successful as a playwright. Taking his madness one step further, he blamed his failure on society. This was the beginning of the insanity that became Dietrich Eckart. Later on, Eckart developed an ideology of a “genius higher human,” after reading earlier writings by Lanz von Liebenfels. Eckart saw himself like Arthur Schopenhauer and Angelus Silesius, and also became fascinated by Mayan beliefs, but never had much sympathy for the scientific method. That makes sense, because he seemed to want to make up his own truths. Eckart also loved and strongly identified with Henrik Ibsen’s Peer Gynt.

In 1913, when he moved back to Munich, he joined up with Rudolf von Sebottendorff’s right wing Thule Society, and became very politically active. He wrote the nationalist play “Heinrich der Hohenstaufe” (“Heinrich of the High Baptism”), in which he made the claim to world leadership for the German people, craziness that he would eventually pass along to Hitler. Soon he became the editor of the anti-semetic periodical Auf gut Deutsch. Eckart opposed the Treaty of Versailles, which he described as treasonous, and instead spread the so-called Dolchstoßlegende, which stated that the social democrats and Jews were to blame for Germany’s defeat in World War I. He was involved in the founding Deutsche Arbeiterpartei (German Workers’ Party) together with Gottfried Feder and Anton Drexler in 1919, which later on was renamed Nationalsozialistische deutsche Arbeiterpartei (National Socialist German Workers’ Party, NSDAP). He invented and published the NSDAP’s own periodical Völkischer Beobachter, and also wrote the songtext “Deutschland erwache” (Germany awake), which became the anthem of the Nazi party.

Adolf Hitler was born April 20, 1889, just a few years before Eckart’s dad’s passing. During a speech he gave before party members on August 14 1919, Eckart met Adolf Hitler. He exerted considerable influence on Hitler in the following years. Hitler looked at him as his “fatherly friend.” On November 9 1923, Eckart was involved in

the Nazi party’s failed Beer Hall Putsch,as was Hitler. They were arrested and sent to Landsberg prison along with other party officials, but he was released again soon due to illness. He died of a heart attack caused by a morphine addiction in Berchtesgaden on December 26, 1923. Hitler later dedicated the first volume of Mein Kampf to Eckart, and also named the Waldbühne in Berlin “Dietrich-Eckart-Bühne” when it was first opened for the 1936 Summer Olympics. In 1925, Eckarts unfinished essay, Der Bolschewismus von Moses bis Lenin. Zwiegespräch zwischen Hitler und mir (“Bolshevism from Moses to Lenin. Dialogues between Hitler and me”), was posthumously published, although it has been shown that it the dialogues were an invention. The essay was, in fact, written by Eckart alone. I don’t know what Hitler would have been like had e not met Eckart. My guess is that the evil ideas Hitler had were there before their meeting, but I do believe that Eckart had a great influence on Hitler,and probably helped formulate some of the evil that was to come.