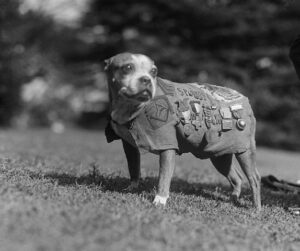 One day in 1917, a stray pit bull mix wandered onto the Yale University campus. Normally this would have meant a call to the local dog pound, but the dog rather attached himself to members of the 102nd Infantry Regiment, who were training at the school that day. While it was a bit unorthodox, the lost pup fit right in. He “volunteered” to participate in drills and quickly learned to salute with his right paw. He really seemed to want to enlist in the Army. The antics and intelligence of the dog quickly won the heart of Private James Robert Conroy, who decided to adopt the dog. He named the dog Stubby, because of his short, stubby tail. When it came time for the unit to ship out, Private Conroy couldn’t leave Stubby behind, so he smuggled him on board the troop ship. As they were getting off the ship in France, he hid Stubby under his overcoat…somehow without detection again. When Conroy’s commanding officer finally did discover Stubby, there might have been trouble, but Stubby saluted him, just as he had been trained to in camp, and the commanding officer couldn’t resist. He allowed the dog to stay on board. 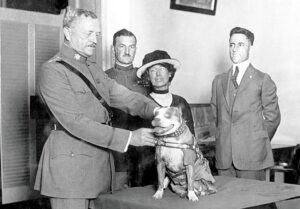 Stubby was a soldier all the way. He didn’t enlist to sit around and do nothing. While in France, in the trenches, Stubby was exposed to mustard gas. “Mustard gas or sulfur mustard is a chemical compound belonging to the sulfur-based family of cytotoxic and blister agent chemical warfare agents known as sulfur-mustards or mustard agents. The name mustard gas is widely used, but it is technically incorrect: the substance does not actually vaporize into a gas, but instead disperses as a fine mist of liquid droplets.” After Stubby recovered, he returned to the frontlines with his own specially-designed gas mask. The exposure to the mustard gas, combined with a dog’s heightened sense of smell, allowed Stubby to warn the 102nd of imminent poison gas attacks. Stubby also learned how to locate wounded soldiers during patrols, a very important part of his job. While technically a mascot, Stubby earned the rank of sergeant after he spotted a German spy and attacked the stunned man until reinforcements arrived. In his 18 months of service, Stubby participated in 17 battles, survived a series of wounds, and provided a much-needed boost to the morale of his fellow soldiers. 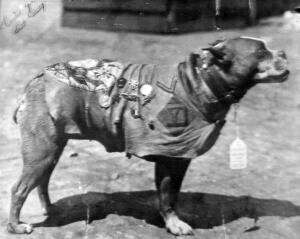 When World War I was over, Sergeant Stubby, as a decorated hero made his way back to the United States with Conroy. By this time, the dog now outranked his owner, and had become a national icon. Sergeant Stubby was invited to lead parades and was given awards until his death in 1926. Stubby died in his sleep on March 16, 1926. After his death he was preserved via taxidermy and his cremains were sealed inside of the mount. In 1956, Conroy decided to present Stubby to the Smithsonian. The taxidermy mount of the dog is part of the permanent collection at the Smithsonian National Museum of American History. It is currently on display in their “Price of Freedom: Americans at War” exhibit.