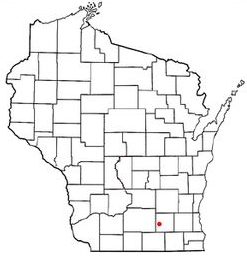 When we think of rain showers, most of us think of a pleasant spring or summer afternoon when the day is hot, and the rain cools things down, and everything smells so good, but on a beautiful April day in 1897 in Jefferson County, Wisconsin, and particularly in the town of Palmyra, the shower they received was not so pleasant. That morning, after a shower overnight, residents woke up expecting to see puddles of rainwater here and there, but instead the sight they saw was appalling. It was like nothing they had ever seen before.

On the ground, the cars, and every other surface in the area were thousands of worms…and they weren’t worms anyone knew about. They were a strange species that was unknown to the area. There was no place that the people could walk without stepping on the disgusting worms. People even had them in barrels that were designed to catch rainwater for drinking, so the drinking water was compromised too. Finally an expert fisherman and gardener, named Captain McDonald, told the people that they were Gilt-Edge Worms. He said that he could tell by their yellow and gold spots and rings. He said that he had used these particular worms for bait while fishing in Ireland.

Well, that was one thing, but Wisconsin is nowhere near Ireland, so how did they get there? Well, the people started to speculate that somehow the worms must have drifted across the ocean in a cloud, but when you think about it, that is an odd thought. Nevertheless, after having watched a story on The Weather Channel about a town that had fish fall out of the sky one time, and that they thought it might have been from a water spout that had scooped them up from a nearby water source, I suspect that something similar might have happened, although I don’t know if the same thing could have happened with a tornado over land, because I doubt if the Gilt-Edge Worm is a water dwelling creature. I don’t suppose they will ever know exactly how the incredible worm shower happened for sure, but while it was a disgusting situation at the time, the townspeople soon decided

that they might as well make the best of it, and go fishing!!

The captain told them that Trout found the worms particularly tasty, and hard to resist, especially in the muddy waters after a rainfall, so in very short order, the townspeople decided that it must have been Providence (another word for a gift from God) that brought the worms to their area so miraculously overnight, when trout fishing in the nearby lakes and streams was a universal pastime. So, after finding out about the worms value, I’m sure the people were a little more careful about where they were stepping, so they didn’t kill the worms that might help them catch more trout.