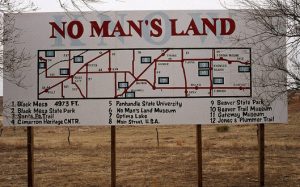 Little is known about the early life of William Coe, always known as “Captain” Bill Coe, except that he was a southern boy and worked as a carpenter and stonemason…until he turned to a life of crime, that is. It is believed that he fought with the Confederates during the Civil War, which is probably where he came to be known as the “Captain,” but there is no solid poof of this.

“Captain” Bill Coe arrived in the Oklahoma Panhandle about 1864, having decided to settle in that area. The area was referred to as “No Man’s Land”t that time. The strip of land, measuring some 35 miles wide by 168 miles long, was not included in any state and therefore left without any law and order. It was a haven for outlaws for years , and William Coe took advantage of that situation. Along a long high ridge jutting southwest from a large mesa near the town of Kenton, Oklahoma, “Captain” Coe built a “fortress” to protect himself and his gang of some 30 to 50 members, who primarily rustled cattle, horses, sheep, and mules. Coe’s headquarters, made of rock walls that were about three feet thick. There were portholes for protection rather than windows, as well as a fully stocked bar, living quarters for his men, and a number of ladies of the evening for their entertainment. Coe’s fortress became known as “Robber’s Roost.”

These men raided ranches and military installations from Fort Union, New Mexico to the south, Taos, New Mexico to the west, and as far north as Denver, Colorado to make their living. They also robbed freight caravans traveling along the Santa Fe Trail, as well as area ranches. Coe’s gang hid the stock in a canyon about five miles northwest of their hide-out. They built a fully equipped blacksmith shop, which contained all the tools necessary to maintain the herds, as well as changing the brands. When all hint of the previous owners were removed, the gang then moved the herds into Missouri or Kansas to sell. They got away with their lawlessness for several years…then they made a major mistake when they raided a large sheep ranch in Las Vegas, New Mexico in 1867, killing two men before making off with the herd to Pueblo, Colorado. They had been wanted men before, but these murders put Coe and his men on the “wanted list” like never before. Soon the U.S. Army from Fort Lyon, Colorado were pursuing them.

The Army attacked the Robber’s Roost fortress with a cannon. The walls crumbled like pebbles. The attack killed and wounded several of the outlaws. Though Coe and others were able to escape, several outlaws that weren’t killed in the battle were hanged on the spot, while others were arrested and taken back to Colorado. Coe continued his crimes and his freedom for about a year, hiding out in a small, now abandoned settlement of Madison, New Mexico, near Folsom. Then, while he was sleeping in a woman’s bunkhouse, her 14-year-old son rode from the ranch and contacted area soldiers, who soon returned and arrested Coe. The fugitive was then taken to Pueblo, Colorado to await trial and along the way, allegedly said, “I never figured to be “outgeneraled” by a woman, a pony, and a boy.” 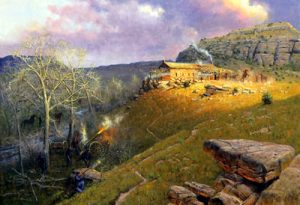 Before Coe could be brought to trial, vigilantes took matters into their own hands on the evening of July 20, 1868. They forcibly removed him from the jail, loaded him into a wagon, and hung him on a cottonwood tree on the bank of Fountain Creek, while he was still handcuffed and shackled. The next day, his body was discovered and buried under the tree that he was hanged from. Years later, when a new road was being built in the vicinity of Fourth Street in Pueblo, workers found the skeletal remains of what is believed to have been Coe’s.