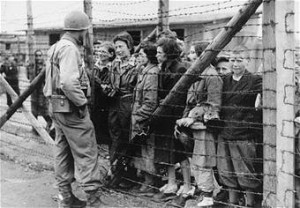 After years of being oppressed, starved, beaten, murdered, and used for experimentation, the Jewish people decided that it was their right to avenge their dead. The Nuremburg Trials were supposed to do all that, but so many of the Nazis had fled the country to escape the sentences they deserved, and once out of the country, it was almost impossible to get them back to face those sentences. In the late 1940s, under Juan Domingo Peron’s leadership (October 17, 1945 to July 1, 1974), the government secretly allowed entry of a number of war criminals fleeing Europe after Nazi Germany’s collapse, as part of the infamous ratlines. The number of Nazi fugitives that fled to Argentina surpassed 300, and included notorious war criminals such as Erich Priebke, Martin Bormann, Joseph Mengele, Eduard Roschmann, Josef Schwammberger, Walter Kutschmann, Otto Skorzeny and Holocaust administrator Adolf Eichmann, among others. In May 1960, Eichmann was kidnapped in Argentina by the Israeli Mossad and brought to trial in Israel. He was executed in 1962. At the time, Argentina condemned the Israeli government for abducting Eichmann, leading to a diplomatic spat between the nations.

There was a financial incentive for Argentina to accept these war criminals, and they needed to provide a safe haven for them. Wealthy Germans and Argentine businessmen of German descent were willing to pay the way for escaping Nazis. The initial plan of the fleeing Nazis was to regroup, lay low for a while, and then come back with a vengeance. The Holocaust years had been very profitable for the Nazis. Nazi leaders had plundered untold millions from the Jews they murdered and some of that money accompanied them to Argentina…meaning the Argentine economy was helped by the war criminals…another incentive to help them hide out.

Some of the smarter Nazi officers and collaborators saw the writing on the wall as early as 1943 and began hiding gold, money, valuables, paintings, and more. They often moved their plunder to Switzerland. Ante Pavelic and his cabal of close advisors had several chests full of gold, jewelry, and art they had stolen from their Jewish and Serbian victims. These riches eased their passage to Argentina considerably. Disappearing, even in 1945 was not an easy matter, but if one had money, it was far more possible. The war criminals even paid off British officers to let them through Allied lines…a treasonous act for which those British officers should have 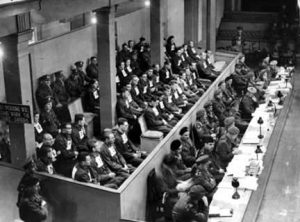 also been prosecuted and hung. Sometimes the corruption in government and military entities, even those who are supposed to be on the side of good, is absolutely astounding.

After the World War II, and the release of the surviving Jews, the Nuremburg Trials convicted these evil monsters, but many of them were gone before their sentence could be carried out. Enter the Nokmim, a group of Jewish men, also referred to as The Avengers or the Jewish Avengers. These men were a Jewish partisan militia, formed by Abba Kovner and his lieutenants Vitka Kempner and Rozka Korczak from the surviving remnants of the United Partisan Organization (Fareynikte Partizaner Organizatsye), which operated in Lithuania under Soviet command. Elements of the Nokmim collaborated with veterans of the Jewish brigade in British Palestine to form a new organization called Nakam, a group of assassins that targeted Nazi war criminals with the aim of avenging the Holocaust. The name comes from the phrase (Dam Yehudi Nakam – “Jewish Blood Will Be Avenged”) (the acronym DIN means “judgement”).

The Nakam (“vengeance”) Group was the most extremist group. They numbered around 60 Jews who were former Partisans, as well as other Jews who survived the Holocaust. This group was not about to let these men get away with all the atrocities they put their Jewish captives through, and then just walk away without punishment…not if they could help it. The group arrived in Germany after the war in order to conduct more complicated and fatal vengeance operations. Their ultimate purpose was to carry out an operation that would cause a broad international response…a warning, if you will, to anyone who might consider trying to harm Jews again, as the Nazis had. They needed to show the world that they would never be treated in such a way again. They would fight back…every time. Notables among the Hanakam group were Abba Kovner, Yitzhak Avidav, and Bezalel Michaeli. The group attempted a couple of mass poisonings, the first of the water supplies of Munich, Berlin, Weimar, Nuremberg and Hamburg, which failed when the poison had to be thrown overboard on a ship when Kovner was discovered to be carrying forges documents. The other attempt was with 3,000 loaves of bread painted with diluted arsenic, headed for 15,000 German POWs from the Langwasser internment camp near Nuremberg. The camp was under US authority. On April 23, 1946, it was reported that 2,283 German prisoners of war had fallen ill from poisoning, with 207 hospitalized and seriously ill. According to Harmatz, 300 to 400 Germans died. He said this “was nothing compared with what we really wanted to do.” A 2016 report by the Associated Press countered that the operation ultimately caused no known deaths, despite documents obtained through a Freedom of Information Act request to the National Archives and Records Administration 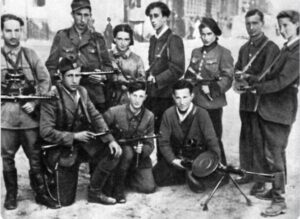 stating the arsenic found in the bakery was enough to kill approximately 60,000 persons. Apparently, the arsenic was spread too thin to be lethal.

It’s hard to say just how much information is correct and how much is incorrect. I suppose it depends on who is reporting, and how accurately they want to report what they have. Propaganda in any war runs rampant, so we will likely never know. Records can and do go missing, especially when someone wants to disprove their enemies. Whether so many people died by poisoning or not, the Nokmim and the spin-off Nakam brought vengeance on many of the Nazis who would have escaped justice without them.