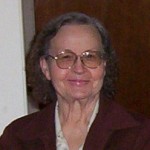 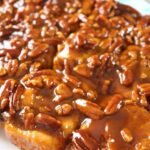 It’s hard to believe that my mother-in-law, Joann Schulenberg has been in Heaven over four years now. She was such a big influence in my life for over 43 years. She was my second mom, and I loved her very much. I know that not everyone can really say they love their in-laws, but I was blessed in that I could. My mother-in-law was a capable homemaker, and she did all the “homemade” things she could. From her cooking and baking, including “murder” cake (a fudge-lovers dream) and the best caramel pecan cinnamon rolls you have ever tasted, to her clothing and knitted sweaters, she was someone who was impossible to “live up to.” I say that in a loving way, but you couldn’t out “homemake” my mother-in-law. And her work was perfect. Still, she was one that was willing to teach you what she knew, without making you feel inadequate.

For almost all of her married life, my mother-in-law was a homemaker. I believe there was a short time…maybe a year early on, when she worked, but mostly, she had a family to take care of and that was her career. I know that many people think that a woman should have a career, but the truth is that most of them would just love to be able to stay home and raise a family. There are a few out there, who are blessed to be able to do just that, and she was one of them. Now don’t get me wrong, a homemaker works as hard as any other career, and maybe harder. They have to wear many hats…nurse, chef, maid, seamstress, accountant, counselor, chauffer, teacher, and many more. They don’t work an 8-hour day, their day starts early and often goes into the late night. Still, my mother-in-law loved her job, and she loved her family. She also found time to make things like afghans that she could sell at craft fairs in town. She also made dish cloths and hot mits. Her things were beautiful and sold very well. She reminds me of the verse in the Bible, “She makes linen garments and sells them, and supplies sashes for the merchants,” Proverbs 31:24. That was what she did.

I think though, for my mother-in-law, that one of the greatest things to have happen was that her first great 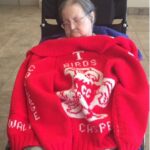