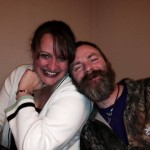 My niece, Machelle Moore has been married to her husband, Steve for fifteen years now, but when she first met him, the one odd thing she noticed was that just abut everything he had was labeled SRM. I’m not sure if Machelle knew why everything had SRM on it, but when her sister, Susan came to his place, she immediately asked what that was. He said that it was his initials,. The girls thought that was funny, so to this day, they call him SRM. When he was born, his family called him the 10 Guy, because he was born on 10/10, and weighed 10 pounds. No wonder he’s so tall now.

Steve is very into guns, and his dream is to have a gun building business someday. He and my Uncle Bill would have gotten along great, as they are both gun nuts. Steve doesn’t hunt, even thought he likes guns and the mountains, but I can relate to that. I would much rather hunt wildlife with a camera than a gun. I am not against hunting, but I just don’t think I could do it myself.

Steve loves the mountains. He is very much a homebody, and doesn’t like traveling very much, but for the 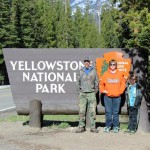 mountains, he will make an exception. In fact, for the mountains, he will almost be the first one out the gate. When Machelle’s parents were getting a new trailer, Machelle wanted to buy their old one. Steve didn’t think he wanted to do that, but she insisted. Once they had it, and they could go camping in the mountains, Steve was sold on it. I suppose he thought she was going to want to travel all over the country, but when he found out that she wanted to go camping in the mountains, he was totally on board. He likes to leave it up in the mountains all summer, and then go up every chance they get. For someone who didn’t really want a trailer, he has sure changed his view. Steve did make and exception this year, when he and Machelle did travel to Yellowstone Park this summer, and all I can say is, “Steve, what happened? She got you out of town!! Are you going to be ok, after such an awful experience?” Ok, just kidding. I know you all had a great time. You aren’t a total hermit, just a mountain man, and Yellowstone Park is in the mountains.

When I first met Steve, he was a clean shaven young man, but these days…like most mountain men, he likes 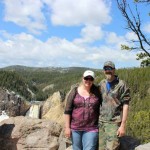 to sport a beard. That and the love of the mountains really does make him a mountain man in my book. I honestly think he could be one of those mountain men who move out to the wilderness, and come to town once a year. That isn’t to say that Steve is anti-social, but he really doesn’t like to travel, and if Machelle was ok with it, I think he would be one of these people who cold like that lifestyle. I can relate to that sometimes. Bob and I love to hike in the mountains, and when you are out there, you are very free from all the hustle and bustle of the city. Sometimes that might feel really nice, but I don’t suppose I would like it on a daily basis. Steve, on the other hand, just might. Today is Steve’s birthday. Happy birthday Steve!! I’m glad you are a good sport. Have a great day!! We love you!!