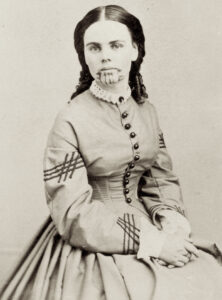 Mary Ann and Royce Oatman had seven children, and Mary Ann was pregnant with their eighth child in 1851, when she and Royce decided to move their family the Gila River area of California. The Oatman children ranged in age from one to 17, the eldest being Lucy Oatman. The family has only been on the trail for four days from their starting point if Maricopa Wells, when they were approached by a group of Native Americans who were asking for tobacco and food. Royce Oatman was hesitant to share too much with the small band of Yavapais, because of the lack of supplies. The Yavapaus saw this as stinginess, and became irate. The Yavapais attacked the Oatman family…clubbing them to death. All were killed except for three of the children. Lorenzo, who was 15 years old was left for dead, and 14-year-old Olive and 7-year-old Mary Ann, who were taken to be slaves for the Yavapais.

When Lorenzo woke up after the attack, he found his parents and most of his siblings dead, but he saw no sign of little Mary Ann or Olive. With great effort, Lorenzo made the hazardous trek to find help. He eventually reached a settlement, where his wounds were treated. When he had recovered, Lorenzo rejoined the emigrant train. Three days later the train reached the bodies of his slain family. The story was told far and wide In great detail in newspapers over the decades. Lorenzo said, “We buried the bodies of father, mother and babe in one common grave.” The men had no way of digging proper graves in the volcanic rocky soil, so they gathered the bodies together and formed a cairn over them. It has been said the remains were reburied several times and finally moved to the river for re-interment by early Arizona colonizer Charles Poston. I’m sure that was a source of relief for Lorenzo. He refused to give up hope that his sisters were alive. He determined never to give up the search for his only surviving siblings.

Olive and Mary Ann were held captive for one year by the Yavapais before they were traded to the Mohave people. Lorenzo was in the process of exhaustively attempting to recruit governmental help in searching for his sisters. The trade for the girls was initiated by the Mohave people. At first, the Yavapais refused, but the Mohave Chief Espaniole saw the girls and their poor treatment during a trading expedition. He tried to make a trade for the girls. The Yavapais refused, but the chief’s daughter, Topeka, was persistent and returned once more offering a trade for the girls. Eventually the Yavapais gave in and traded the girls for two horses, some vegetables, blankets, and beads. At some point after the girls went to be with the Mohave people, Mary Ann died from starvation. This happened in about 1855–1856, when Mary Ann was ten or eleven. It has been claimed that there was a drought in the region, and that the tribe experienced a dire shortage of food supplies. Olive would have died too, had not Aespaneo, the matriarch of the tribe, saved her life by making a gruel to sustain her.

Olive was left alone with the Mohave people for about four years. This was not the worst time in their captivity. The Mohave people tattooed the girls chins and arms, which was not a marking of a slave, but rather of family. The also told Olive that she could go to the village of the white people if she wanted, but they dared not go with her, because they feared for their lives for having kept her for so long. I suppose, she didn’t know anyone in that village either, so why go.

When Olive was 19 years old, Francisco, a Yuma Indian messenger, arrived at the village with a message from the authorities at Fort Yuma. They had heard that a white girl was living with the Mohaves, and the post commander requested her return, or to know the reason why she did not choose to return. The Mohave tried to resist, but after some discussion, in which Olive was included, the Mohaves decided to accept these terms, and Olive was escorted to Fort Yuma in a 20-day journey. Topeka (the daughter of Espianola and Aespaneo) went on the journey with her. Before entering the fort, Olive was given Western clothing lent by the wife of an army officer, as she was wearing a traditional Mohave skirt with no covering above her waist. Inside the fort, Olive was surrounded by cheering people. I wonder if she felt like cheering…or crying. Olive’s childhood friend Susan Thompson, whom she befriended again at this time, stated many years later that she believed Olive was “grieving” upon her return because she had been married to a Mohave man and had given birth to two boys. Of course, there is no record to substantiate that claim.

In November 1865, Olive Oatman married a cattleman named John B. Fairchild. They met at a lecture she was giving alongside in Michigan. Fairchild had lost his brother to an attack by Native Americans during a cattle drive in Arizona in 1854, the time in which Oatman was living among the Mohave. Olive began wearing a veil to cover her famous tattoo and became involved in charity work. She was particularly interested in helping a local 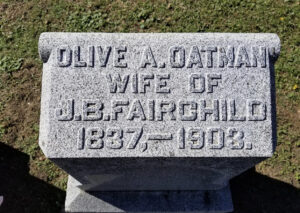 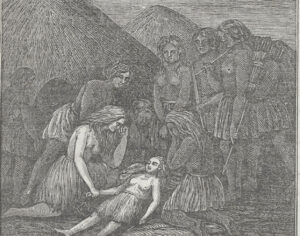 orphanage. She and Fairchild never had their own children, but they did adopt a little girl and named her Mary Elizabeth after their mothers, nicknaming her Mamie.

Olive’s brother, Lorenzo died on October 8, 1901. Less than 2 years, Olive Oatman Fairchild died of a heart attack on March 20, 1903, at the age of 65. She is buried at the West Hill Cemetery in Sherman, Texas.