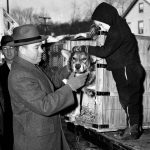 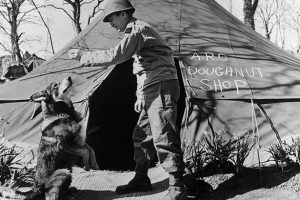 As most of us know, dogs have been used in many kinds of work from K-9 units to military units to guide dogs, to cadaver dogs, and many more. During World War II, one such dog named Chips, who was a Shepherd-Collie-Husky mix, served for 3.5 years of the war. When the US entered World War II, the military actually asked Americans to “donate” their dogs to serve on patrols and guard duty. That seems so strange to me. How could the dog know what was going on? How could it not get depressed or aggressive, thinking its owner was dead or had abandoned it? It’s one thing to send a soldier into a war situation, they have either been legally drafted or they freely joined up, but a dog…or any animal for that matter, couldn’t possibly understand why, after having a family of their own, they were suddenly in a foreign country, without their owner, their own bed, or their home.

Nevertheless, when their country asked, over 11,000 Americans volunteered their pets, including Chips’s owner, John Wren of Pleasantville, New York. Chips the first “volunteer” dog in the United States, took part in the invasion of Sicily, just a year into his deployment. When an Italian machine gunner pinned down Chips and his squad, he broke away from his leash and charged into the enemy position. A single shot rang out. Then, the Italian gunner emerged with Chips at his throat, followed by three more soldiers. They all quickly surrendered. Chips received a wound on his scalp and burns on his mouth and left eye. That didn’t stop this hero dog, who kept fighting and helped capture 10 more soldiers that day.

After the war, per their request, it was time for Chips to be returned to his family. Plans would have to be put in place for that to happen. So, in the fall of 1945 he was taken back to Front Royal where he was retrained so that he could go back to his family. A dog who had been in combat couldn’t just go back to his family as if nothing had happened. Finally in December of 1945, he traveled home to Pleasantville, riding in the baggage car of a train. He didn’t go alone. He was accompanied by six reporters and photographers who wanted to 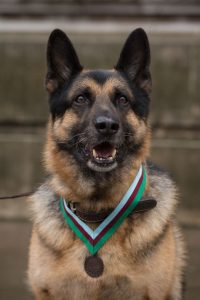 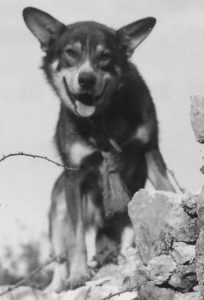 cover the story. They were met by Mr and Mrs Wren and their son, Johnny, who was only a baby when Chips left. The girls raced home after school to see their dog. It was a sweet homecoming. Chips lived for just four months before his kidneys failed. I guess war had taken its toll.

Chips’s story made him an international sensation. He received a Silver Star for his heroics. Unfortunately, some people thought that a dog shouldn’t be awarded the same medal as a human, so it was revoked. Then, in 2018, he was awarded the PDSA Dickin Award, the highest honor for wartime bravery for an animal. A well-deserved honor. While his award was amazing, I think that the family should have also received an award, as should all of the other families who donated their dogs for the war effort. It was a very selfless act.