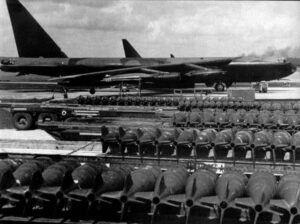 Why would the United States secretly bomb a neutral nation in the middle of a war with an enemy nation? That is the question I have been asking myself concerning the Menu Bombings…the bombing of neutral Cambodia during the Vietnam war. It was thought that bombing supply routes in Cambodia would weaken the enemies of the United States. I’m not sure that worked exactly. It did cut off the supply line, but innocent people were caught in the crossfire. Nevertheless, the decision was made to bomb Cambodia, and also to keep it a secret from the American public, who would most likely feel about it the same way, I do. Intentionally bombing innocent people just rubs most of us the wrong way. 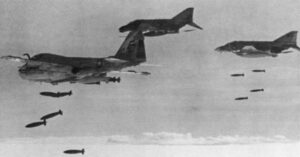 on March 18, 1969, when US B-52 bombers are diverted from their targets in South Vietnam to attack suspected communist base camps and supply areas in Cambodia for the first time in the war. This mission, originally intended to be called Operation Breakfast, and subsequent B-52 strikes inside Cambodia became known as the “Menu” bombings. The strikes included a total of 3,630 flights over Cambodia dropping 110,000 tons of bombs during a 14-month period through April 1970. This bombing of Cambodia and all follow up “Menu” operations were kept secret from the American public and the US Congress because Cambodia was considered a neutral nation. The missions had to be kept secret to avoid a public outcry…so, an intricate reporting system was established at the Pentagon to prevent disclosure of the bombing. 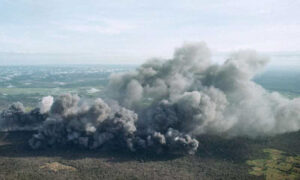 Somehow, the story was leaked by the New York Times in May of 1969, but there was little adverse public reaction. Now I find that incredible. The people were so “asleep” that they hardly noticed the bombing of a neutral country. It makes me wonder just how long the people have been asleep. How could people simply take no notice of such a huge violation of the rules of war. I’m sure there are things I don’t know about this war…lots of things, in fact, but I don’t think it is proper for our government to hide things for the people…especially such a big set of bombing missions on a neutral country. The people of this nation need to open our eyes and watch what our government is doing…before it’s too late.