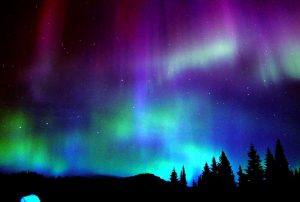 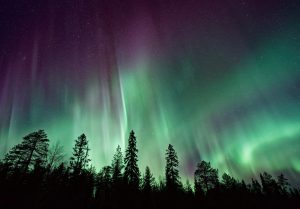 When my husband, Bob and I went to Alaska a few years ago, I was hoping against hope that we would be able to see the Aurora Borealis. The likelihood was slim, of course, because they are most often visible in the winter and we were there in the summer. The Aurora Borealis is caused by solar flares, which occur when pent up magnetic energy on the sun’s surface is unleashed in blasts of radiation and charged particles. The resulting explosions are equivalent to the force of millions of hydrogen bombs, and the solar winds they create have the ability to wreak havoc on Earth’s atmosphere. That was precisely what happened in late August and early September of 1859, when the planet was bombarded by the largest solar storm on record. The so-called “Carrington Event” was named for the British astronomer, Richard Carrington, and it made the skies glow with shimmering, multi-colored auroras as far south as Hawaii. In Colorado, it was so bright that one witness reported people “could easily read common print” at night. And that was in August and September!! Why couldn’t I have been around to see that one?

Most of us have seen pictures of the Northern Lights, also known as the Aurora Borealis. The scene is unforgettable offering an entrancing, dramatic, magical display of dancing lights that are varying in color and fascinate all who see it. It’s hard to believe that an explosion on the sun that sends out radioactive magnetic particles into the atmosphere is responsible for this dazzling natural phenomenon. Of course it is quite complicated. If all those particles were able to just hit the Earth, the event would be disastrous. “The aurora is caused by the interaction of high-energy particles (usually electrons) with neutral atoms in earth’s upper atmosphere. This process is similar to the discharge in a neon lamp, or the fluorescence of a television screen. The strongest auroras are quite bright, comparable to moonlight. At the center of the sun, the temperature is 27 million degrees Fahrenheit (15 million degrees Celsius). As the temperature on its surface rises and falls, 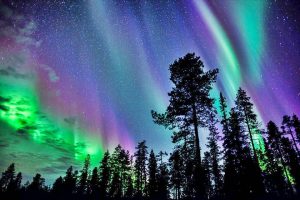 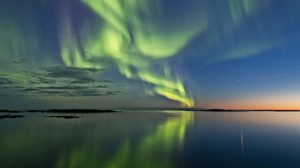 the sun boils and bubbles. Particles escape from the star from the sunspot regions on the surface, hurtling particles of plasma, known as solar wind, into space. It takes these winds around 40 hours to reach Earth. When they do, they can cause the dramatic displays known as the aurora borealis.” However it all happens, is pretty much irrelevant to most of us, we just like the beauty of the Aurora Borealis, and we will continue to be mesmerized by them.