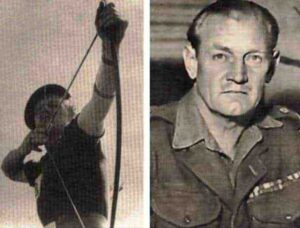 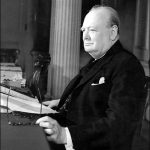 Most soldiers know that when you are trying to sneak up on your enemy, it’s probably best to leave the bagpipe playing at home. Nevertheless, John “Mad Jack” Churchill, who was one of the most colorful and unusual soldiers to fight in World War II, might find just about anything…you just never knew. The British-born “Mad Jack” Churchill had no known relation to Prime Minister Winston Spencer-Churchill, although I would not be surprised to find there was a relation. He was known for carrying a Scottish Claymore Sword into battle, and felt that any officer who didn’t have one while going into battle, was basically out of uniform. “Mad Jack”was also an avid archer and bagpipe player and brought both of these hobbies onto the battlefield.

Churchill volunteered for Great Britain’s first-ever commando unit in 1941, and he participated in covert operations in Italy and Norway. In one Norway operation, he played his bagpipes on the landing craft as they approached the shore, then picked up his sword and attacked. In 1944, “Mad Jack” was on assignment in Yugoslavia to assist with the communist partisans under Josip “Tito” Broz, and that was when his infamous bagpipe incident happened.

During a mission to attack a German position on the Island of Brac, “Mad Jack” and his men advanced under heavy fire. In the end, he was the only one left alive. After running out of bullets, and in typical “Mad Jack” style, he picked up his bagpipe and played “Will Ye No Come Back Again?,l.” It was an 18th-century song celebrating the Jacobite Prince Charles III’s escape from being captured by the British monarchy.

Unimpressed, the Germans knocked him out with an explosion and captured him, but they spared his life…not because of his bagpipe prowess, however, but because they thought he was related to Prime Minister Winston Spencer-Churchill. They thought that having a relative of the prime minister would provide them with sone leverage. Unfortunately for them, as far as anyone knew there was no connection. “Mad Jack” was placed in a prison camp, from which he escaped captivity twice before making it home. 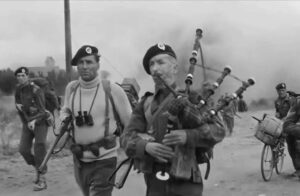 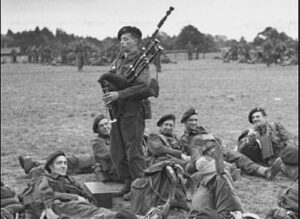 Archibald Denny, on March 8, 1941. They had two children, Malcolm John Leslie Churchill, born 1942, and Rodney Alistair Gladstone Churchill, born 1947. He also had a grandson named James Also stair Gladstone Churchill. “Mad Jack” lived a long and happy life. Nevertheless, I seriously doubt if any part of it was as crazy as the time he spent in World War I. He passed away on March 8, 1996 at 89 years old, in the county of Surrey.