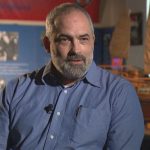 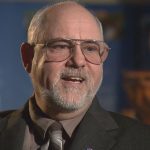 Most kids have, at one point or another, imagined that they were hunting for lost treasure. Some people, however, continue to be treasure hunters well into adulthood. Such was the case with two Michigan-based treasure hunters in 2011. The men were hunting for gold in Lake Michigan. Of course, that doesn’t mean they were looking for gold nuggets, like the gold rush days of old. They were looking for gold in the many shipwrecks of the Great Lakes.

On this particular treasure hunting expedition, Kevin Dykstra and Frederick Monroe were searching for $2 million in gold that had, according to local legend, fallen from a ferry crossing Lake Michigan in the 1800s. While moving their sonar over the lake, it caught a mass below. Dykstra dove into the water to video the mass. “I didn’t go down there with the expectation of seeing a shipwreck–I can tell you that,” Dykstra told Live Science. Nevertheless, there beneath the cold waves of Lake Michigan was an aging shipwreck. Brown and gray zebra mussels, encrusted the wooden planks of the old ship. When Dykstra and Monroe reviewed the video, they realized that the ship might be the remnants of a 17th-century ship called the Griffin, or Le Griffon. French explorer René-Robert Cavelier, Sieur de La Salle built the ship in 1679. It was lost in Lake Michigan the same year.

Some experts were not convinced that the men had indeed found the Griffin. The experts thought it might be the remnants of a tugboat that was scrapped after “steam engines became more economical to operate,” said Brendon Baillod, a Great Lakes historian, who has written scholarly papers on the Griffin. More evidence was needed to prove that this ship was the Griffin. State archaeologists reviewed the footage, and “They’ve been very diligent to say, ‘This is really interesting; these are some neat pictures,'” Dykstra said. “Can we call this the Griffin? Certainly not–not without a lot more information–but these are very compelling.”

La Salle apparently sailed the Griffin through the Great Lakes and crossed into Lake Michigan in an effort to reach the mouth of the Mississippi River, according to Baillod. Running out of money, he disembarked with the other expedition leaders, leaving the ship and its crew to pay off his debts with furs. “La Salle never saw the Griffin again. La Salle returned to the area in 1682, to try again to locate the Mississippi’s mouth. But members of the Potawatomi tribe brought pieces of the ship to the explorer, including some moldy beaver furs and a pair of sailor’s britches,” said Baillod, who translated La Salle’s journal from French to English.

The Native Americans told La Salle that the crew planned to sail toward the Straits of Mackinac in stormy weather. “The [American] Indians told the captain not to sail out, to wait the storm out, but he wouldn’t listen to them,” Baillod said. Of course, because of his haste to set sail, the captain lost control of the ship in the strong winds. The ship was blown away from shore, southward, toward some islands in the distance. “They lost the ship from sight,” Baillod said, “and that’s the last anybody has ever seen the Griffin.”

About 30 various adventurers have claimed to have found the Griffin, but have never really been able to prove their claim. “They’re looking for something else, they find an old ship and they’ve heard of the Griffin, so they pronounce it the Griffin,” Baillod said. According to Baillod, none of these adventurers were looking near the Beaver Island area, which was most likely the area the ship went down. But the latest finding, made popular again by Wreck Diving Magazine in its latest issue, holds a number of clues about the ship’s past. “There was no rudder on the boat,” Dykstra said. “That was kind of telling to us that the ship probably weathered a storm; otherwise, there would probably be a rudder on it.” They also found a part of the ship that they said could be a mussel-covered griffin, the mythical beast carved onto the ship’s bow.

Dykstra was so intrigued that he went back to have another look. He took a magnet with him to help determine the metal composition of the ship. Purely by accident, a nail attached itself to the magnet. The treasure hunters discovered it later, once they were above water. “When we had it looked at, they [the archaeologists] could tell that the nail was very old,” Dykstra said. “It was a hand-forged nail, which helps date it back to that time period, we feel.” Of course, this accident could have landed the men in hot water with the state of Michigan, which has rules stipulating that artifacts found on state land, including the land at the bottom of the Great Lakes, are state property. “The two men did not bring up the nail on purpose, and they plan to return it to the state,” said Dean Anderson, the state archaeologist for Michigan.

About 1,500 shipwrecks have been found on the bottom of Lake Michigan, Anderson said, and it’s unclear whether this one is the Griffin. “It’s very difficult to access a wreck based on photo and film footage,” Anderson said. If the state underwater archaeologist were to look at the wreck, he would look for artifacts that could be 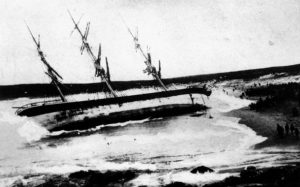 dated, such as ceramics or glass. Baillod is “99 percent sure” that the wreck is not Le Griffon. The figurehead likely isn’t the remains of a griffin, but a “big encrustation of zebra mussels,” on burned wood. He noted that the wreck is near the western Michigan coast, not near Beaver Island, the area mentioned in La Salle’s journal. Nevertheless, Dykstra and Monroe said they’ll wait until they hear the final word. They’re not going back to the wreckage for a while, so they don’t make the site vulnerable to other treasure seekers. In the meantime, the duo plans to continue their hunt for the gold bullion. “It’s a mystery ship that got in our way,” Dykstra said, “and now, we’re going for the gold.”