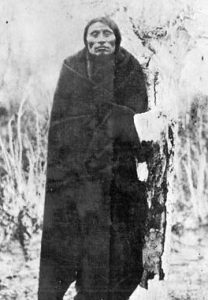 Little Wolf was a Cheyenne Indian who was often called “the greatest of the fighting Cheyenne.” Little Wolf was the chief of an elite Cheyenne military society called the Bowstring Soldiers. Little Wolf had demonstrated a rare form of bravery and a brilliant understanding of battle tactics from a very early age, which led to him becoming a trusted leader. His prowess showed first in conflicts with other Indians like the Kiowa, but even more in disputes with the United States Army, Little Wolf led or assisted in dozens of important Cheyenne victories.

While it has not been confirmed, most historians agree that Little Wolf was probably involved in the disastrous Fetterman Massacre of 1866. In that battle, the Cheyenne lured the 80 American soldiers out of the fort in Wyoming, and wiped them out. Cheyenne attacks also forced the United States military to abandon Fort Phil Kearney along the Bozeman Trail, and Little Wolf is believed to have led the war party in torching of the fort. He was also a leading participant in the greatest of the Plains Indian victories, the Battle of the Little Bighorn in 1876.

Even with such an impressive list of victories to his credit, Little Wolf, like many of the other Plains Indian warriors, was finally forced to make peace with the White Man. After the horrendous loss at the Battle of the Little Bighorn, the army launched a major offensive. In 1877, the government sent Little Wolf to a reservation in Indian Territory. Little Wolf was disgusted with the conditions and the lack of supplies the Indians were forced to endure. In 1878 Little Wolf made up His mind to leave the reservation. His plan was to head north for the old Cheyenne territory in Wyoming and Montana. Chief Dull Knife and 300 of his followers went with him.

Little Wolf and Dull Knife made it clear that their intentions were peaceful, but the settlers in the territory we’re afraid they would attack. So, once again, the government sent cavalry forces that assaulted the Indians. Little Wolf’s skillful defensive maneuvers kept Cheyenne casualties low. When the band neared Fort Robinson, Nebraska, Dull Knife and some of his followers stopped there, but Little Wolf and the rest of the Cheyenne continued to march north to Montana.

In the spring of 1879, while still traveling north, Little Wolf and his followers were overtaken by a cavalry force 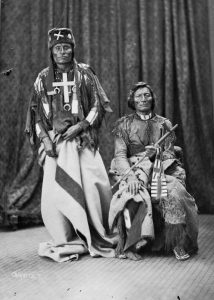 under the leadership of Captain W.P. Clark, who happened to be an old friend of Little Wolf’s. The confrontation could have easily turned violent, but with his force of warriors diminished and his people tired, Little Wolf was reluctant to fight the more powerful American army. Clark’s civilized and gracious treatment of Little Wolf helped convince the chief that further resistance was pointless, and he agreed to surrender.

After returning to the reservation, Little Wolf briefly served as a scout for General Nelson A. Miles. However, during this time he disgraced himself among his people by killing one of his tribesmen. The formerly celebrated Cheyenne warrior lived out the rest of his life on the reservation but had no official influence among his own people. After all of his honorable leadership and years of respect among his peers, Little Wolf was, in the end, taken down by his one dishonorable act. People always remember the things you do wrong, but the things you do right seem to fade quickly away.