Growing Up Is Overrated 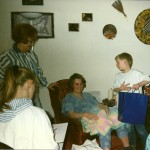 From the time he was just a little boy, my nephew, JD Parmely loved little kids. He got so excited whenever he knew he was getting a new cousin. He wanted to be involved in everything, from the baby shower, to holding the baby, to playing with the kids as they grew. Sometimes, it’s a big help to have JD take over the entertainment of all the little kids…at least until they start making too much noise or rough housing too much. I suppose that is because JD is, in reality, a big kid himself. In a lot of ways, I think he has decided that growing up is overrated, and sometimes I have to agree with him. Plus, he has lots of uncles who have never really grown up either, so he is in good company in that department. I promise you, that his Uncle Bob has never really grown up either…not one bit, in fact.

One of the coolest things to happen in JD’s recent life is the family addition of his niece, Reagan Parmely, who is his brother, Eric and his wife, Ashley’s daughter. He and Reagan get along famously, because both of them like to play. JD has the energy to chase Reagan wherever she decides to go, and for her, that is lots of fun. And now that Reagan is getting a new sister or brother in September, JD will soon have a new little one to play with. At this point, JD really has no desire to get married and have kids of his own, but he is having a great time with his cousins and niece. I guess it pays to be a kid at heart, because all the kids want to hang out with you…and that is exactly what has happened to JD. My grandchildren felt the same way when they were little. JD was the fun guy at all the family gatherings.

Last year, JD bought his first house. It had belonged to his grandparents, and in my opinion, 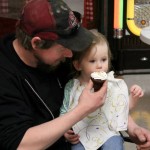 the house had felt so lonely. I was so glad that he bought the house, because a home should be lived in, not sitting empty. When JD moved in, there was activity there again. I can’t say if the house feels any less lonely, because those walls can’t talk to me, but I am pretty sure the garage has never felt better. JD loves to work on his multiple vehicles, and therefore, spends hours in the garage…even into the wee hours of the morning, sometimes. JD would have to be called a Vehicle Fanatic, because his must own twelve or fourteen of them. It’s just what he does. And that’s ok. If he enjoys it, he should do it. It’s what makes JD…well, JD!! Today is JD’s birthday. Happy birthday JD!! Have a great day. Don’t work too hard on your cars, and try to get some sleep!! We love you!!