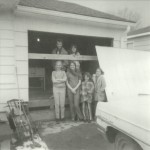 Lately, I have been watching the remodeling shows on television, such as Flip or Flop, Fixer Upper, and Property Brothers. I find it very interesting that they can take a house that starts out looking so awful, and turn it into something quite beautiful. The reasons people remodel a home are as varied as the people themselves. By watching the shows, I’ve learned a lot about what it takes to plan and execute a remodel of your own house. I can’t say, of course, that I am ready to tackle such a thing, but maybe someday I could be, if I watch those shows for a while.

I grew up in a little house, not far from where I live today. Back then, things were tight. Nevertheless, like most families who live in little houses, we were a very close family. Our parents, Allen and Collene Spencer, and their family of five daughters lived in a two bedroom house for much of my young life. Then, in the early 1970’s, my sister, Cheryl got married. Her husband was going to be going into the Air Force, and so they were living with us for a time. Our family was growing in another way too, because Cheryl was going to have her first child…her daughter and my niece, Chantel Masterson Balcerzak. 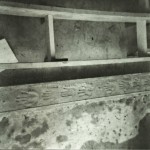 It was decided that the garage, which pretty much never held a car, but was rather a storage unit, should become a third bedroom and a utility room. Our house was about to undergo a renovation, and we would be the contractors. It was an exciting time. So much was changing in our family. My younger sisters and I were about to become aunts. Of course, the exciting part of the time would be short lived, because after my sister’s husband was done with basic training, they would be stationed in Plattsburgh, New York, and that would be one of the loneliest times we would face. But, that time was a little way off yet, and remodeling the house was exciting.

At first the work was done in the garage, while it still resembled the garage to a large degree. Cement was poured and we all put our hand prints in it before it dried…along with our names. It became a permanent part of the structure, and one I had forgotten about until I saw the picture that was taken of them. Before long, the garage had a floor that was the same level as the floor in the house, and doors were put in for the utility room and the bedroom that would become our parents room. The sleeping arrangements were a little unorthodox during this time, and my younger sisters and I found ourselves sleeping in the attic of the garage…at place that had been our clubhouse years earlier. It was almost like 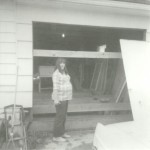 camping. The room that had been ours was now occupied by Cheryl and her husband.

Before very long, the renovations were complete, and we were back to sleeping in the bedroom again, except with only four of us now. Just as quickly, it seemed anyway, Cheryl and her husband were living in New York, and there were two sisters to each room. The renovations continued to make our lives more spacious, even if the house now had a bit of an empty feel. Having part of the family living so far away never got easier for any of us…until the time that they moved back to Casper for good. That was a great day. Still, by then, I was married and had a daughter of my own. Our family never lived together in that house again. Like that house, life had changed forever.