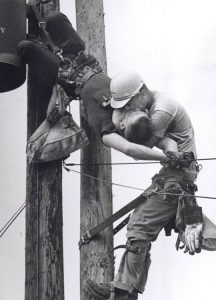 It’s every workers nightmare…being faced with a life or death situation involving a co-worker, and you are the only thing standing between the co-worker and certain death. On a hot July day in Florida in 1967, a nightmare emergency situation would unfold making linemen history, and journalistic history at the same time.

Rocco Morabito was a journalist with the Jacksonville Journal. His day began as he was headed to a local news event. He paused to watch as linemen worked above him, before heading on to his job for the day, covering a railroad strike. H snapped a few images and then headed back to the office, but as he passed the linemen, he heard screaming. Looking up, he saw Randall G. Champion, unconscious, his body hanging limp but still in his safety harness. Fellow lineman, J. D. Thompson was an apprentice lineman, but in a nightmare emergency moment, he sprang into action with lightening speed, racing to the pole and quickly climbing up to Champion. The position of Champion’s body made it impossible to administer CPR, so Thompson cradled his head in his arm and began giving mouth-to-mouth resuscitation, working to breath life back into his fellow lineman. His quick thinking and actions, made Thompson a hero that day.

Being a photojournalist, Rocco instinctively snapped an image and then ran to his car, to use the radio to have the paper call an ambulance. In reality, Champion would owe his life to both men, because they both reacted quickly and did what needed to get done to get Champion the help he needed. Unable to further assist with the rescue, Rocco grabbed his camera. He backed up and continued to walk backward until he backed into a house. With no where else to go, he clicked “THE historic image.” As he snapped that last photo, Thompson yelled out, “He’s Breathing!”

After Rocco ‘got the shot’, he returned to his car and again radioed the newspaper dispatch, this time, telling them, ”You might want to wait for this. I think I’ve got a pretty good one.” The paper waited, and the wait was indeed worth it. Rocco Morabito won the 1968 Pulitzer Prize for Spot Photography…the first of its kind. Bob Pate, the copy editor of the Jacksonville Journal is credited with the ‘slug that stuck’, ”The Kiss of Life.” From safety classes to anthologies, and even a documentary in 2008 on the 40th anniversary of that fateful event, the photo has maintained a life of its own. When I saw it, I was as moved by it as anyone else who has ever seen it and been told what it was. You just don’t walk away from that without having a sense of awe about the events of that day. And the training value of it would be phenomenal!! 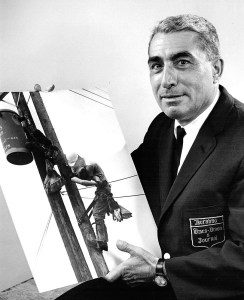 Champion and Thompson both continued to work as linemen until retirement. Champion retired in 1991, but sadly passed away in 2002 at the age of 64, as a result of heart failure. Thompson retired around 1995 having received several awards for his heroism and quick thinking. He is noted as having said that, “he was acting on his training and was thankful he could revive his downed co-worker.” He was just “doing his job.” What?? I don’t think so!! This was not just doing his job. This was heroic. That is typical of most heroes. They were “just doing their job.” Rocco worked for the newspaper for a total of 42 years. For 33 of those years, he worked as a photographer. He retired in 1982, and passed away at the age of 88 on April 5, 2009. His work, including “The Kiss of Life”, will continue to live on, illustrating the harrowing work that our linemen men and women perform every day, and sometimes just how heroic they really are.