My sister, Alena Stevens is in the middle of preparing for one of life’s biggest changes…grand-motherhood. The biggest life change is motherhood for sure, but grand-motherhood ranks right up there with motherhood as being one of the most special times of our lives. Alena’s son, Garrett Stevens, and his beautiful wife, Kayla are expecting their first child in August, and Alena is beyond excited…as is her husband, Mike. I know Alena is going to be an amazing grandmother. Alena’s work with children at Verda James Elementary School has kept her on top of the whole kid thing, and up to date on the latest cool stuff kids like. That’s an advantage that many grandmothers don’t have, and so they had to re-acclimate themselves to, but not Alena. The students she works with at the school love her very much and she loves them too. As her little granddaughter grows, Alena will be one of the cool grandmas, which is always a big plus.

Alena also loves to decorate, and sometimes I think she missed her calling, because the decorating she does on her home is lovely. She has a real eye for it. Most of us hang a few pictures up, and hope we made them look a little different than a picture album, but not Alena. Her flair for decorating makes her home a show piece. Maybe I should make her come and decorate mine. Alena like to change her house up periodically, to give it new life, and that could be part of the reason that it is always a showpiece. Whatever the case may be, she has a lovely home that people enjoy coming over to.

Alena is a summer girl, which makes her June birthday the perfect time of year.While no officially born in the summer, it marks the beginning of what most of us deem to be summer. Alena love the heat and being out in it,especially at the lake. She looks forward to her husband’s family’s yearly trip to Boysen Reservoir, where they enjoy the water, the sand and sun, and spending time with the whole family.She especially loves their annual horseshoe tournament…complete with a traveling trophies for the year’s winners to gloat over. While the competition is fierce, the family isn’t they all get along very well, and the only time they are fierce is during 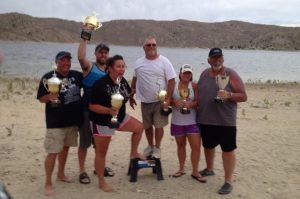 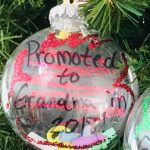 the competition. Making it more fun, they choose teams or partners, so no one is always partnered with their spouse. Team work can take on a whole new meaning with this method. When you dont get to pick, but are placed with a team. Their annual trip is coming up soon, so I know she will be preparing for all the fun days to come, especially with the summer culminating with the best part of all…that new little baby girl. Today is Alena’s birthday. Happy birthday Alena!! Have a great day!! We love you!! 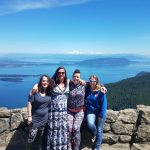 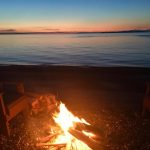 My daughter, Amy Royce has been having a few adventures lately…and some life changes. Recently, her husband Travis had to go to Toronto on a business trip, and he was going to be gone over the Memorial Day weekend, so Amy’s friend, Amber Rose invited her and several other friends to go with her to Orcas Island, where Amber used to live. The plan was to relax and eat fish tacos on Lopez Island, and steak and fresh prawns on Friday night. She was really looking forward to the adventure, but she said that it was strange to think that Travis was on the other side of the United States, in another country.

The girls had a great time on Orcas Island. They took the ferry to Orcas Island…a ride which lasted an hour and ten minutes, and always goes by far too fast. The views from the ferry boats are amazing and so relaxing. Once the girls got to the island, the adventure was on. They built campfires on the beach and watched the sunset, and enjoyed the wonderful views. The next day they went up to Mount Constitution to look at the amazing views from there. Of course, Amy posted some great pictures to make us all jealous…and it worked!! Still, while I was jealous, I was also happy for her, because I knew that she was having a wonderful time, and it would have been a bummer for her to have to spend the Memorial Day weekend by herself.

Amy received an early birthday present this year, when she became a great aunt for the first time. Her nephew, Chris Petersen and his fiancé, Karen had their baby girl on May 30. While is was very exciting, Amy had hoped that the baby would hold out until her birthday. Nevertheless, Amy is excited to meet her new grandniece.

The adventures began for Amy about the time she and her family moved to Washington state, and they have continued in one form or another since that time. she and her husband, Travis have gone on several whale watching cruises, and taken a number of Ferry boat rides. They go to the beach regularly to watch the sunsets, and of course, Amy has lots more of her very favorite form of weather…rain. Her kids have moved there too, and now the family bowls on a league, taking first place on the league this year, and second place in the 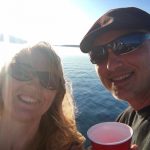 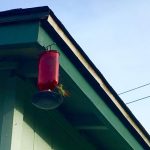 countywide tournament for the first place winners of each league. Her life has changed in many ways, and she is totally content in her new home. I am happy for her. He has flowers and plants that grow there that don’t in Wyoming, and she has her favorite bird…the hummingbird at her home on a regular basis. She loves the gray squirrels that hang out in her yard, and she loves the mountain views they have there. Life is full of adventures for Amy now, and that is very cool. Today is Amy’s birthday. For one month she and her sister get to be the same age again!! Sorry Corrie, but happy birthday Amy!! Have a totally awesome day!! We love you!!