Fire In The Hills 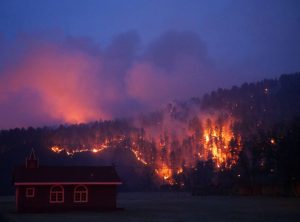 Every year, my husband, Bob Schulenberg and I spend a week around the Fourth of July hiking in the Black Hills. We have been coming to the Black Hills for about 30 years, and it never gets old. I suppose it might if all we did was the normal touristy things, but when you get back in the wilderness areas of the Black Hills, it really is a whole different world, and it’s ever changing, especially when there is a heavy fire year. Unfortunately, this year seems to have been a fire year, at least in the Wildlife Loop of Custer State Park. The fire started on December 11, 2017, and while the cause of the Legion Lake Fire officially remains under investigation, it is believed to have been a downed power line that sparked the blaze. The wildfire shut down Custer State Park 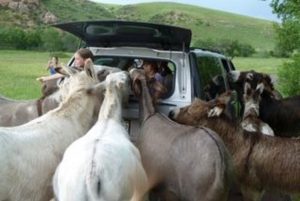 that Monday, and burned an estimated 54,000 acres. It was believed to have started about 7:30 that morning.

The winds didn’t help matters either, gusting to 50 miles per hour. The fire moved along the Centennial Trail toward Star Academy East Campus ad Badger Hole. By Monday afternoon the head of the fire had crossed Heddy Draw and spread to both sides of Barnes Canyon Road. the ponderosa pines in the area were burned to the crown. It was so strange to see the green tops of the trees above the burnt orange lower sections of the trees and the blackened trunks. 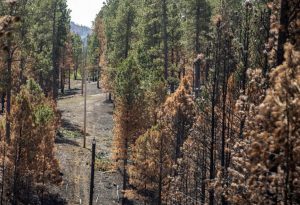 Most of the wildlife fared well. The 860 bison that call the park home were left unscathed, but three of the park’s beloved begging burros had to be euthanized after the blaze. That is probably the saddest part of this for me, because we love the burros. They are gentle enough to eat out of your hand, and the love the attention everyone gives them. A few more of the burros still face an unknown fate due to the burns they received. The smell of a campfire that burned too long hung in the dry western South Dakota air for a long time. While we couldn’t smell the scorched trees any more, the scars were still visible everywhere.