On The Big Kid Side 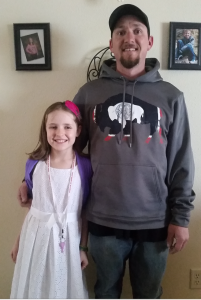 In recent years, a new phenomenon has come into being. Or maybe it was a thing before and has now made a comeback, but when I was a kid and when I was raising my kids, there was no such thing as a Daddy-Daughter Dance. I kind of wish there had been, because it is really a cool way for dads to bond with their daughters. Kaytlyn really wanted her daddy, Josh Griffith to take her and her sister, Jala Satterwhite, last year, but something came up and he couldn’t go. This year Jala wasn’t interested, but Josh and Kaytlyn went to the dance, and I 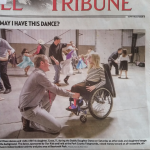 I imagine that the reason she feels that way is that one of the commercial loan officers at the First Bank of Wyoming in Powell, Becky Duran is on billboards all over town. Everyone knows her name, and to Kaytlyn, that makes her that most awesome celebrity ever. Sometimes she is even in the paper too. Every time they pass a billboard with her name on it, Kaytlyn shouts, “There’s Becky Duran!” Kaytlyn has loved this celebrity for over a year, and her mom, Susan decided that it was time they met. She made an appointment with Becky, and had her mom, Debbie Cook take the girls in. They were both very excited. She gave them bags of promotional bank 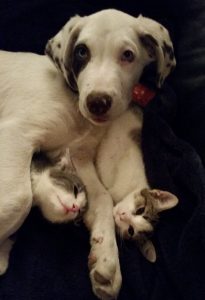 items and they got to have hot chocolate with her. It was a day to remember for both of the girls, and how sweet of Becky to make it such a wonderful memory for them to cherish.

Living in the country has it’s privileges…especially when it comes to pets. Kaytlyn loves her pets. The family has 4 cats and 3 dogs, which might seem like a lot to city dwellers, but in the country, you can do that. Two kittens and a puppy were added to the family in the same weekend. They were all 8 weeks old in November. Since then, it has been pretty crazy around their house. The puppy is named Trump, and I love that. A couple weeks later they found out that he is deaf, but he is the sweetest dog, and well behaved, which is uncommon for a dog that cannot hear commands. Kaytlyn has nicknamed him Truck. Today is Kaytlyn’s 9th birthday. Happy birthday Kaytlyn!! Have a great day!! We love you!!