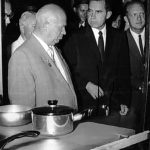 The debate between capitalism and communism is not new, and in fact has been going on for a long time. Possibly one of the strangest debates, known as the “kitchen debate” was between Vice President Nixon and Soviet leader Nikita Khrushchev. The debate was heated at times, but what was strangest about the debate was the fact that it took place in the middle of a model kitchen set up for an exhibit. Why they would have such a discussion in a model kitchen at a national exhibit is the really beyond me, but that is where it took place.

The so-called “kitchen debate” became one of the most famous episodes of the Cold War, and many think it might have really led to fighting words, had it not been for the two men controlling their tempers in the end. The meeting was set up in late 1958. In an effort to draw the two nations closer together, the Soviet Union and the United States agreed to set up national exhibitions in each other’s nation as part of their new emphasis on cultural exchanges. The Soviet exhibition opened in New York City in June 1959, and the United States exhibition opened in Sokolniki Park in Moscow in July. On July 24, before the Moscow exhibit was officially opened to the public, Vice President Nixon served as a host for a visit by Soviet leader Khrushchev. As Nixon led Khrushchev through the American exhibition, the Soviet leader’s famous temper began to flare. When Nixon demonstrated some new American color television sets, Khrushchev launched into an attack on the so-called “Captive Nations Resolution” passed by the United Stares Congress just days before. The resolution condemned the Soviet control of the “captive” peoples of Eastern Europe and asked all Americans to pray for their deliverance. I don’t suppose that resolution set well with Khrushchev, and coming right before the exhibition probably set the whole debate in motion.

After denouncing the resolution, Khrushchev then sneered at the United States technology on display, saying that the Soviet Union would have the same sort of gadgets and appliances within a few years. Nixon, was not a man to back down from a debate, so he cane right back and goaded Khrushchev by stating that the Russian leader should “not be afraid of ideas. After all, you don’t know everything.” The Soviet leader snapped at Nixon, “You don’t know anything about communism–except fear of it.” With a small army of reporters and photographers following them, Nixon and Khrushchev continued their argument in the kitchen of a model home built in the exhibition. With their voices rising and fingers pointing, the two men went at each other. I’m sure it was quite a show. Nixon suggested that Khrushchev’s constant threats of using nuclear missiles could lead to war, and he chided the Soviet for constantly interrupting him while he was speaking. Taking these words as a threat, Khrushchev warned of “very bad consequences.” Perhaps feeling that the exchange had gone too far, the Soviet leader then noted that he simply wanted “peace with all other nations, especially America.” Nixon, 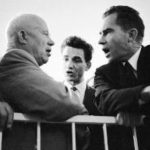 feeling slightly embarrassed said that he had probably not “been a very good host.” The debate, so quickly inflamed, fizzled in much the same way…at least between the two men…not so much the media.

The “kitchen debate” was front-page news in the United States the next day. For a few moments, in the confines of a “modern” kitchen, the diplomatic gloves had come off and America and the Soviet Union had verbally jousted over which system was superior…communism or capitalism. As with so many Cold War battles, however, there was no clear winner…except perhaps for the United States media, which had a field day with the dramatic encounter. It was the sensationalism that the news media craves.