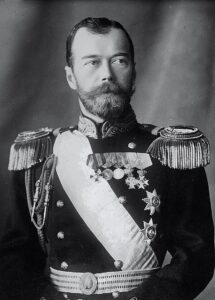 Czar Nicholas II and Czarina Alexandra were not always considered popular, in fact you could say that the tumultuous reign of Nicholas II, who was the last czar of Russia, was tarnished by his ineptitude in both foreign and domestic affairs that helped to bring about the Russian Revolution. Nevertheless, he was a part of the Romanov Dynasty, which had ruled Russia for three centuries.

I think that his young son, Alexi’s health issues played a rather large part in what many would consider his failure to lead, but things were looking up for the family when a young Siberian-born muzhik, or peasant, who underwent a religious conversion as a teenager and proclaimed himself a healer with the ability to predict the future, won the favor of Czar Nicholas II and Czarina Alexandra. Grigory Efimovich Rasputin was able, through his ability, to stop the bleeding of their hemophiliac son, Alexei, in 1908.

Many people, from that time forward, began to criticize Rasputin for his lechery and drunkenness, if these things are true. The left-wing Bolsheviks were deeply unhappy with the government and began spreading calls for a military uprising. The Bolsheviks were a revolutionary party, dedicated to Karl Marx’s ideas, and they wanted a coup d’etat, which is a sudden, violent, and unlawful seizure of power from a government. That said, the last thing they needed was a “miracle-working holy man” advising the Czar. Rasputin exerted a powerful influence on the ruling family of Russia, infuriating nobles, church orthodoxy, and peasants alike. He particularly influenced the czarina and was rumored to be her lover.

Rasputin had to go, so sometime over the course of the night and the early morning of December 29-30, 1916, Grigory Efimovich Rasputin was murdered by Russian nobles eager to end his influence over the royal family.

Still, that wasn’t all, and the rest of it should have scared them…to death. A group of nobles, led by Prince Felix Youssupov, the husband of the czar’s niece, and Grand Duke Dmitri Pavlovich, Nicholas’s first cousin, lured Rasputin to Youssupov Palace on the night of December 29, 1916. First, Rasputin’s would-be killers first gave the monk food and wine laced with cyanide…which miraculously had no effect on him. When he failed to react to the poison, they shot him at close range, leaving him for dead. Once again, they failed to kill him. Rasputin revived a short time later and attempted to escape from the palace grounds. They caught up with him and shot him again, and then beat him viciously. Finally, because Rasputin was still alive, they bound him and tossed him into a freezing river. His body was discovered several days later and the two main conspirators, Youssupov and Pavlovich were exiled. It was the beginning of the end. The Bolshevik Revolution of 1917 put an end to the imperial regime. Nicholas and Alexandra were murdered, and the long, dark reign of the Romanovs was over.