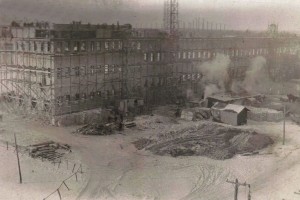 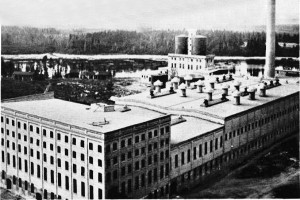 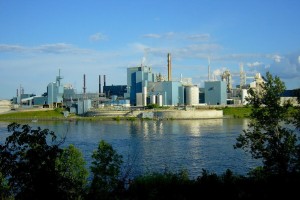 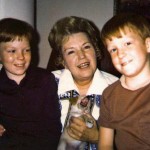 Today my cousin, Tim reminded me that his grandmother, my Aunt Laura would had been 100 years old had she still been with us. My Aunt Laura was born August 3, 1912 in International Falls, Minnesota. She was the oldest child of my grandparents, Allen and Anna. It would be almost 10 years before she would finally get any siblings, after which she would get a total of 3 in a little over 5 years. During those years, Aunt Laura would become her mother’s right hand, helping out with the younger children and with the farm, since her dad worked on the rail road and was away much of the time.

During World War II, my Aunt Laura became one of the famous Riveters, working in the Shipyards in Superior, Wisconsin to help out the war effort. 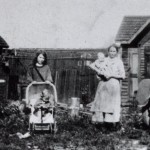 My Uncle Bill, her brother, always hated that term, Riveters, because they actually did not rivet anything, they welded, and Aunt Laura became very skilled at welding. That is very difficult for me to imagine, because Aunt Laura always seemed so feminine to me. I couldn’t imagine her working as a welder. My dad had been a welder too, and it is a sweaty, dirty job, so to think of Aunt Laura doing that, as well as my Aunt Ruth and my Uncle Bill, was very odd. My dad didn’t work in the shipyards during the war, because he was on active duty in England, on a B-17G Bomber. His siblings wanted to show their support for their brother, as well as the rest of the troops, and they did so very efficiently.

Aunt Laura went on to marry and have two sons, Eugene and Dennis, and three grandsons, Tim, Shawn, and David, and great grandsons Daniel and Cody. Boys seemed to be

her lot in life. Girls, if she ever wanted any, just weren’t in the cards for her. I never heard that she was upset about that, so I think she must have thought it was a pretty good idea. As far as girls were concerned though, Aunt Laura stayed the night with me years ago, she and my girls got along just fine.

It’s hard to believe that Aunt Laura has been in Heaven for a decade now, but I’m quite sure she is celebrating her special day with my dad, Aunt Ruth, Grandma and Grandpa..and many others. Have a wonderful day Aunt Laura!! Happy birthday, and we love you!!