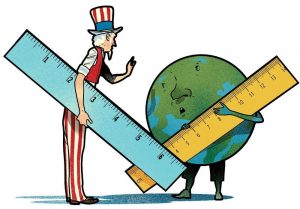 The metric system…in many ways, a source of contention between the American government, or whoever it is who keeps trying to push it on the American public, and the American public in general. Sure, it’s mixed in with our way of life, but somehow, it’s not something that most of us really understand very well. It’s like a strange foreign language, that no one wanted to learn in the first place…but somebody told us that it was important, better, more efficient…or some other such nonsense. It’s perfectly acceptable to use the metric system in the United States…in fact, Congress originally authorized its use in 1866 and has repeatedly tried to make it accepted in the years since, but the American public has continued to reject it.

private industries, but the American public never really took to the system and largely dismissed it, making the United States the only industrialized nation where that’s the case. These days the medical field exclusively uses it in their jobs, but when a nurse takes your temperature and tells you that it is 38° C, and you ask her how much that is in “English,” most of them have no idea that it is 101° F. Yes, they know that you are running a fever, but seriously, when you are running a fever, do you want to have to get out your nearest conversion table to figure out how high it is. Most of us know that normal is 98.6° F, but when you don’t feel good, the last thing you want to do is math. I don’t know who came up with inches and centimeters, or Celsius and Fahrenheit battle, but up until 1866, the United States knew what their measurements meant. We didn’t have to try to sit down and figure it all out. Why should we have to now? In American, it just doesn’t measure up.

So, in the next act of “pushiness,” Congress even passed a Metric Conversion Act of 1975 and set up a U.S. 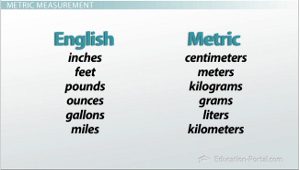 Metric Board to take care of all the planning for the desired transition, but they apparently didn’t empower the board with enough authority, and the American people essentially said, “no” to adopting metric system, and continued on with their miles, pounds, ounces and all the rest. Similarly lackluster efforts since then have done little to get Americans to change their minds. We are a stubborn people, and we don’t really like it when someone tells us that, what we have always known as white, is now black. That simply makes no sense, and just because Congress tells us that it does, doesn’t mean that it is so. I don’t suppose that the failed metric conversion will be the last thing that Congress tries to push on us, that will end up in the junk heap…do you?