Those who support Socialism, Marxism, and Communism have simply never lived under these forms of government, or they are a part of the upper echelon of such a government. People who have been forced to live under these types of government, will ultimately try to find a way of escape or will participate in a national uprising, such as the one that happened in Hungary in 1956.

Sadly, by the time the people realize that they are in serious trouble, the government often has such a chokehold on the nation that the only way out if to have an uprising. Nevertheless, people will eventually fight for their rights, or fight to escape. While the uprising in Hungary began in October 1956, when thousands of protesters took to the streets demanding a more democratic political system and freedom from Soviet oppression, the real problem started long before that. It started when the Communist Party took over and began to systematically take away the rights of the people. There were a few people within the party who could see through the Communist Party’s ideas. When party officials appointed Imre Nagy, a former premier who had been dismissed from the party for his criticisms of Stalinist policies, as the new premier, he began to try to restore peace and asked the Soviets to withdraw their troops. The Soviets did so, but Nagy then tried to push the Hungarian revolt forward by abolishing one-party rule. He also announced that Hungary was withdrawing from the Warsaw Pact (the Soviet bloc’s equivalent of NATO).

This forced the hand of the Soviet government. On November 4, 1956, Soviet tanks rolled into Budapest to

crush the national uprising, once and for all. Te fighting in the streets was vicious, but the Soviets’ greater power ensured their victory. The people had long been stripped of their weapons, and anything else that might have helped the achieve victory. At 5:20am Hungarian Prime Minister Imre Nagy announced the invasion to the nation in a grim, 35-second broadcast, declaring: “Our troops are fighting. The Government is in place.” He tried to reassure the people and keep hope alive, but within hours, Nagy sought asylum at the Yugoslav Embassy in Budapest. He was captured shortly thereafter and executed two years later. Nagy’s former colleague and imminent replacement, János Kádár, who had been flown secretly from Moscow to the city of Szolnok, 60 miles southeast of the capital, prepared to take power with Moscow’s backing. The conspiracy was complete, and the people had been betrayed…even their leader.

The people of the West were stunned by the Soviet action. Soviet leader Nikita Khrushchev had promised to retreat from the Stalinist policies and repression of the past, but the violent actions in Budapest told of a different plan. An out of control government will always chose its own greedy ways over the good of the people it is supposed to serve. On that day, an estimated 2,500 Hungarians died and 200,000 more fled as refugees. Sporadic armed resistance, strikes, and mass arrests continued for months thereafter, causing substantial economic disruption. The spontaneous national uprising that began 12 days before in Hungary was viciously crushed by Soviet tanks and troops on November 4, 1956. 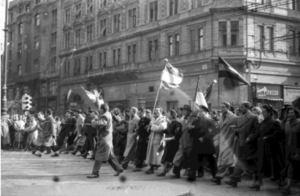 Many Hungarians were angered and frustrated by the inaction on the part of the United States. Voice of America radio broadcasts and speeches by President Dwight D Eisenhower and Secretary of State John Foster Dulles had recently suggested that the United States supported the “liberation” of “captive peoples” in communist nations, but they didn’t see that playing out in their situation. During that time, approximately 30,000 Hungarian refugees were allowed to enter the United States. Yet, as Soviet tanks bore down on the protesters, the United States did nothing beyond issuing public statements of sympathy for their plight.