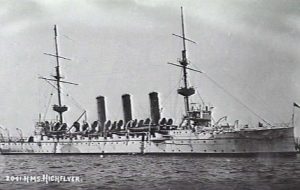 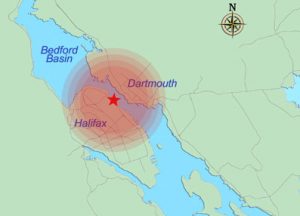 Any time explosives are being transported, there is danger associated with it. Of course, explosives like nitroglycerine used to be very volatile, and just having the bump around on a dirt road could set it off. Things might be safer now, but the danger still exists. On December 6, 1917, in the harbor outside Halifax, Nova Scotia, Canada, a Belgian steamer and French freighter exploded. Both were loaded with ammunition. The explosion was disastrous. Sixteen hundred people were killed immediately. They were sailors looking on from the decks of their ships, rail-workers, and longshoremen. They were onlookers who were drawn to the spectacle of the burning ship. They were laborers looking on from factory windows or doorways, shopkeepers, and firemen. They were wives, mothers and babies, and school children. Just people going about their daily lives, who were caught up in the shocking scene…and it cost them their lives. Nine thousand more people were wounded. The 8 million tons of TNT carried by the ships was intended for use in World War I. The ships were gathered in Halifax, which was the meeting point for convoys to begin the dangerous Atlantic crossing. They would go together as protection from the German U-Boat submarines. The HMS High Flyer was to be the lead ship in the convoy that trip. The freighter from France, the Mont Blanc, had picked up a full load of TNT in New York and came into the harbor that foggy morning. Due to the poor conditions, it collided with the Imo, a Belgian steam boat, also carrying ammunition. A fire resulted and both ships were abandoned immediately.

The Stella Maris was moving up to the Mont-Blanc at the time of the explosion. The crew were attempting to attach a line to the Mont Blanc to tow it away from Pier 6. When the Mont-Blanc exploded the Stella Maris was swamped and thrown up onto the shore. Captain Brannen and nineteen of his crew members were killed instantly. By some miracle William Nickerson, the second mate, and four of the crew members survived. At Pier 8, to the 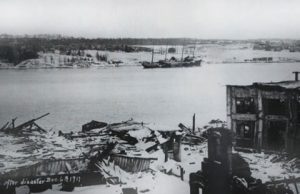 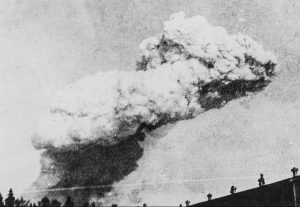 north of Pier 6, stood the steamer Curaca, that had been loading mules. The Curaca was found in the center of Tuft’s Cove, across the harbor, at Dartmouth, with her bow protruding from the water. The stern of the Curaca was pushed in, her masts and smokestack were blown away. Although the Saint Bernard was on the northern side of Pier 6, the pier offered no protection. The Saint Bernard was completely destroyed along with Pier 6 and the Lola R, a small schooner. Here the Saint Bernard was beached at Parsboro, its home port, during winter prior to the explosion. The Picton was tied up at the Sugar Refinery Wharf just below Pier 6. At the time of the explosion the Picton was being unloaded to undergo repairs. Her cargo included munitions. Due to the quick thinking of the longshoremen the hatches were closed. Although the Picton caught fire, it was quickly put out with the help of the crew of the tugboat Lee. A British ship, the Pictou, was at a pier in the harbor and was also filled with ammunition. The crew of the Pictou immediately fled and set the ship free upon witnessing the collision. The High Flyer was the only ship that took any action to try to stop the disaster…it sent 23 men toward the collision to attempt to sink the vessels. They were too late. Just as they reached the burning ships, a massive explosion occurred.

The explosion sent burning debris throughout Halifax. It also caused a large wave to form that pushed the ships at pier right up out of the harbor. A Canadian army officer stationed at Halifax described the result, “All that could be seen for a great circumference were burning buildings, great mounds of iron and brick in the streets and dead bodies.” A 2½ mile radius was completely demolished and the explosion could be felt 125 miles away. The wave of water hit a Navy ammunition plant located near the shores. That water most likely kept it from catching fire. Most other places nearby were not hit with the wave, unfortunately. The railway station collapsed from the blast and crushed scores of people inside. About 100 more were killed in a sugar plant 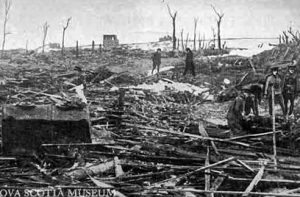 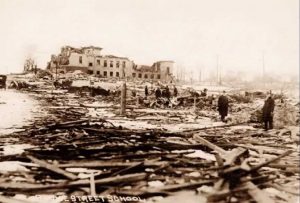 located near the water. Of the 500 students located in schools nearby, less than 10 survived. In all, the death toll was somewhere between 1,200 and 4,000. No one knows for sure because so much of the city was completely obliterated. Many more might have died except for a snowstorm that hit the area later that day. It helped put out the flames, but not before 25,000 people were left homeless in the wake of the disaster.