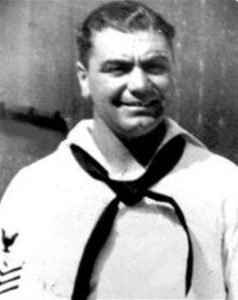 When we think of movie stars, we seldom think of them as soldiers, even if they have played a soldier on television or the movies. Nevertheless, many have served. One of my favorite shows as a kid was McHale’s Navy. McHale was played by Ernest Borgnine, who was born Ermes Effron Borgnino on January 24, 1917, in Hamden, Connecticut. Borgnine was the son of Italian immigrants. His mother, Anna (née Boselli; 1894–c. 1949), was from Carpi, near Modena. His father Camillo Borgnino (1891–1975) was a native of Ottiglio near Alessandria.

Borgnine had a normal childhood, and after high school, he enlisted in the United States Navy in October 1935. He served aboard the destroyer/minesweeper USS Lamberton and was honorably discharged from the Navy in October 1941. Then, the 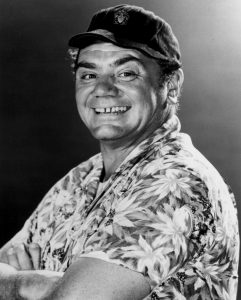 attack on Pearl Harbor on December 7, 1942, changed many things. In January 1942, Borgnine re-enlisted in the Navy. During World War II, he patrolled the Atlantic Coast on an antisubmarine warfare ship, the USS Sylph. In September 1945, he was honorably discharged from the Navy. With the two stints, Borgnine served a total of almost ten years in the Navy and obtained the grade of gunner’s mate 1st class. His military awards include the Navy Good Conduct Medal, American Defense Service Medal with Fleet Clasp, American Campaign Medal with ?3?16″ bronze star, and the World War II Victory Medal. Who knew? 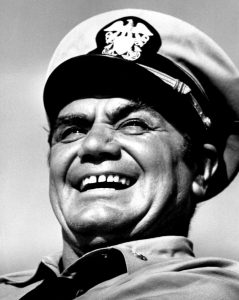 To me, it seems like all this also prepared him for his most famous television show. As a veteran sailor, he knew how things were run on a ship. Of course, how much of his knowledge could be used on the show depends on the directors. If they had any good sense, they would have used his knowledge, and made the show more realistic. Still, as a kid, I doubt if I would know if it was realistic or not, and after all these years, I can’t say I would recall any of the details. Nor would I know if they were realistic or not. Nevertheless, I always liked the show, and I really liked Ernest Borgnine. I just never knew that he had been a sailor during World War II, or that he had played a part in locating and sinking submarines. I also didn’t realize that he enlisted not once, but twice, or that he served a total of ten years. Years later, on July 8, 2012, after many years as a successful actor, Ernest Borgnine died of kidney failure on July 8, 2012 at Cedars-Sinai Medical Center in Los Angeles, California. He was 95 years old.