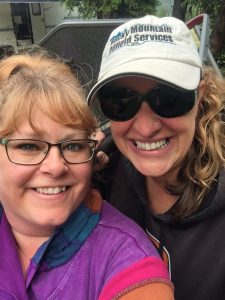 Long before she became my sister-in-law, Rachel Schulenberg was friends with her future nieces, Machelle Moore and Susan Griffith. They didn’t know, when their friendship began, that one day, they would be related. As they all grew up, and began to marry, it was Machelle who instigated the union between Rachel and my brother-in-law, Ron Schulenberg, that made Rachel my sister-in-law and “aunt” to Machelle and Susan, as well as all Ron’s other nieces and nephews.

Of course, Machelle could only be the instigator, Rachel and to be the one to win Ron’s heart, if she want to continue the relationship. Well, that was a slam-dunk. According to Machelle, Rachel is a “mother hen.” She is always trying to make sure that her friends and family have what they need. It really breaks her heart when she is unable to help people. It is at those times that she knows that she

must put them in God’s hands, which as we know, is not an easy task. Her kind heart and loving ways drew Ron to her, and if that wasn’t enough, Rachel is a great cook. When Machelle was going to introduce Rachel to Ron, Rachel asked her what she should cook. For Machelle, it was another slam-dunk, Rachel’s lasagna!! She wanted to impress Ron, and feed him something besides the “frozen burrito” type meals he had been eating. Machelle calls Rachel’s lasagna, “the best in 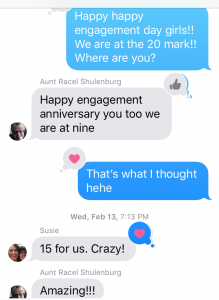 the west,” and Ron agreed. Rachel made a great first impression. Rachel loves to cook and is never bothered by extra people at dinnertime. She always has ways to make sure there is enough.

Probably the most interesting thing about the relationship between Machelle, Susan, and Rachel is the fact that, while none of them knew of it, until later, all three couples got engaged the same day…not the same year, of course, but the same day…February 13th. That has been a lot of fun for them. They call it Engagement Day, and they make a big deal out of it, texting each other to wish each other “Happy Engagement Day!!” The tradition makes it that much more special for all of them. And I think it is very cool too. It is something you just don’t see every day. Today is Rachel’s birthday. Happy birthday Rachel!! Have a great day!! We love you!!