Annals Of The Poor 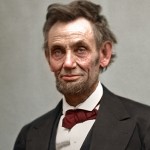 While most people look back on their childhood with fond memories, most of us would say our childhood was probably typical for the era we lived in. Of course, not every childhood is perfect, and some can be absolutely horrible. President Abraham Lincoln was born on February 12, 1890, and spent his childhood years in Kentucky and Indiana. He personally summed up his childhood days on the frontier as “the short and simple annals of the poor.” While that is how Lincoln saw his childhood, he wasn’t the only one in that situation. The hardships he endured there as a child weren’t unique. Frontier life was harsh for most families in the early 1800s. Living and working on the frontier was hard work. In fact, sometimes the people worked as hard as their oxen and horses. According to Lincoln, his earliest memories were of life on the farm in Kentucky where he moved in 1811 with his parents, Thomas and Nancy, and sister, Sarah. She was four years old, and Abraham was two years old. His parents had been married five years.

At Knob Creek, in Kentucky, the Lincoln family lived in a one-room cabin with a dirt floor. The place was very similar to the place where Lincoln was born a mere nine miles way near Hodgenville. Steep, heavily wooded hills rose on each side of the home. Nevertheless, things were “looking up” on the Knob Creek farm, because while the place was leased, Lincoln’s father planted corn and pumpkins on wide fields with rich soil on the 30-acre farm. From the little dirt-floor cabin on the road from Louisville to Nashville, the Lincoln family watched as the “world passed” by. Pioneers with fully loaded wagons, peddlers, local politicians, slaves, missionaries and soldiers returning from the War of 1812.

Abraham’s dad, Thomas Lincoln, who was stern and often domineering, put his son to work before he turned seven. Of course, if you ask me, seven-year-olds can help out, provided that they aren’t mistreated in the process. Abraham filled the wood box, brought water from the creek, weeded the garden, gathered grapes for wine and jelly, picked persimmons for beer making and planted pumpkin seeds.

Lincoln didn’t have many opportunities to go to school, as was common in those days in rural Kentucky. For the most part he was self-taught. Mostly, he and his sister sporadically attended ABC schools—so-called “blab” schools in which students repeated their teacher’s oral lessons aloud. Usually barefoot, Lincoln walked to the one-room schoolhouse, “a little log room about 15 feet square, with a fireplace at one side.”

Two years later, Abraham’s mother, Nancy Lincoln died in the remote wilderness—the first of Lincoln’s many family tragedies. Nancy was a good mother, and her passing was heartbreaking for the Lincoln children. Apparently, she had consumed milk tainted when cows ate poisonous white snakeroot…although, some believed the cause of death was tuberculosis. She was just 34 years old. Eleven-year-old Sarah now became the woman of the house, and all domestic duties fell to her. The Lincoln children’s lives were worse than ever. That winter, the motherless children and their 19-year-old orphan cousin lived dismally in that place.

It didn’t take Thomas long to decide that he needed a new wife, so Thomas Lincoln traveled to Elizabethtown, Kentucky, where he proposed to widow Sarah Bush Johnston, whom he had known since childhood. She accepted, provided Lincoln paid off her debts. On December 2, 1819, Thomas and Sarah married and later returned to Little Pigeon Creek, accompanied by her three children: Elizabeth, 13; Matilda, 10; and John, 9. Thomas’s new wife brought along furniture (including a walnut bureau valued at $50), cooking utensils and comfortable bedding…astonishing luxuries for her new stepchildren. She also brought several books, including the Bible and Aesop’s Fables, which she gifted to Abe. Things were looking up again in the Lincoln household. At his wife’s insistence, Thomas Lincoln installed a cabin floor and plastered cracks between logs. Instead of cornhusks, Abraham and his sister slept on a feather bed. The cramped conditions were no match for the love Sarah brught with her, and the family thrived. To make him look “more human,” Lincoln’s stepmother dressed up the poorly clad Abraham.

On the farm, Lincoln became skillful with an ax. But Thomas didn’t see the need for the reading his son loved.

He wanted him to learn carpentry, but Abraham wasn’t interested, and the matter brought tension to the relationship. Sometimes the illiterate Thomas even reprimanded Abraham for reading instead of doing farm chores. Thankfully, Sarah Bush Lincoln persuaded her husband to allow their son to read and study. “At first, he was not easily reconciled to it,” she recalled, “but finally he too seemed willing to encourage him to a certain extent.” The bond between stepmother and stepson grew. Sarah Bush Lincoln recalled years later, “Abe was the best boy I ever saw.” I think we would a have to agree, he was not just a good boy, but a great man and a great president.