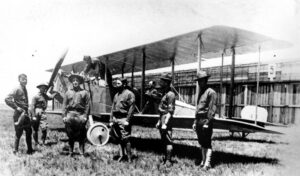 Imagine a time when there was no air force, or for that matter, airplanes. Of course, for those of us living today, that would be very hard to imagine…in fact, maybe impossible. Nevertheless, before the Wright brothers made flight possible, there was not only no planes, but no air force. Then, in 1914, things were about to change forever.

The First Aero Squadron was formed in 1914. It was organized after the start of World War I, but it was first used because of the Mexican revolutionary, Pancho Villa, who was initially a bandit, but later became a general in the Mexican Revolution. He was a key figure in the revolutionary violence that forced out President Porfirio Díaz and brought Francisco Madero to power in 1911. Pancho Villa was an excellent guerrilla leader who fought against the regimes of both of those men. After 1914, he engaged in civil war and banditry. He became notorious in the United States for his attack on Columbus, New Mexico, in 1916, and something had to be done

On March 9, 1916, Villa, who opposed American support for Mexican President Venustiano Carranza, led a band of several hundred guerrillas across the border on a raid of the town of Columbus, New Mexico. Seventeen Americans were killed in the battle.  On March 15, President Woodrow Wilson ordered, US Brigadier General John J Pershing to launch a punitive expedition into Mexico to capture Villa. Four days later, the First Aero Squadron was sent into Mexico to scout and relay messages for General Pershing. On March 19, 1914, Eight Curtiss “Jenny” planes of the First Aero Squadron took off from Columbus, New Mexico, in the first combat air mission in United States history. The squadron was on a support mission for the 7,000 US troops who invaded Mexico to capture Villa.

Despite encountering numerous mechanical and navigational problems, the American pilots flew hundreds of missions for Pershing during which they gained important experience that would later be used by fliers over the battlefields of Europe. Unfortunately, during the 11-month mission, US forces failed to capture the elusive revolutionary, and Mexican resentment over US intrusion into their territory led to a diplomatic crisis. In late January 1917, with President Wilson under pressure from the Mexican government and more concerned with the war overseas than with bringing Villa to justice, the Americans were ordered home. The missions were over.