Adolf Hitler was a greedy man. From the time he decided to get into politics, he planned on controlling Germany, and eventually the rest of the world. Hitler was appointed chancellor on January 30, 1933. It didn’t take long for him to begin his fundamental change of Germany. His plan was always to be a dictator, but it’s hard to do that when the country holds national elections periodically. That said, the first thing Hitler needed to do was to make Germany a one-party state. That way, they could have the pretense of holding elections, but only one candidate would run. So, on June 22, 1933, Hitler banned all other parties, thereby making Germany a one-party state.

Of course, even Hitler couldn’t get this done that easily. He had to ease into it a bit. In March 1933, he pushed through the Enabling Act, which was an amendment to the Weimar Constitution, passed in the Reichstag by a vote of 444 to 94. This new amendment allowed Hitler and his cabinet to pass laws…even laws that violated the constitution…without the consent of the president or the Reichstag. It was the beginning of a very dangerous era in German history. A two-thirds majority was required to pass the bill, so the Nazis used intimidation tactics, as well as the provisions of the Reichstag Fire Decree to keep several Social Democratic deputies from attending, and the Communists had already been banned. It was a rigged passing, and should never have been allowed to happen, but the people didn’t understand the ramifications. Then, on May 10th, the government seized the assets of the Social Democrats. The party was banned on June 22, 1933. On June 21st, the SA raided the offices of the German National People’s Party, who were at one time, their coalition partners. That party was forced to disband on June 29th. It didn’t take long for the remaining major political parties followed suit. On July 14, 1933, the transition was complete when Germany became a one-party state with the passage of a law decreeing the Nazi Party to be the sole legal party in the country. It was further declared that the founding of new parties was illegal, and all remaining political parties in Germany were banned. 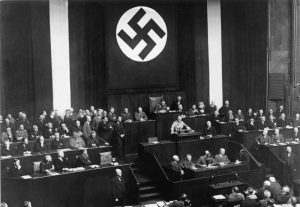 The Enabling Act would subsequently serve as the legal foundation for the dictatorship the Nazis established. Further elections in November 1933, 1936, and 1938 were Nazi-controlled, with only members of the Party and a small number of independents elected. Then, Hitler banned all other parties making Germany a one political party country, the National Socialist party was the only party that then existed in Germany. This change came after several other changes in 1933, including creation of the German Secret State Police (Gestapo) and the banning of Trade Unions. The death penalty was declared for anti-fascists. Today, Germany is a multi-party nation.