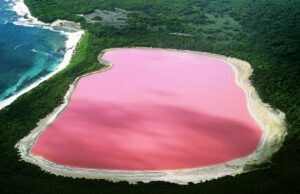 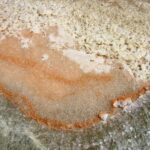 When most of us think of going to the lake, we envision the cool blue water of a lake, most likely somewhere near our city of residence, but if we were to live in Australia, while we might picture a lake near our home, we might not necessarily picture cool blue water. That would be because Australia has more than ten pink lakes. Yes, I said pink. One well known pink lake, is located in Western Australia’s Goldfields-Esperance region.

Pink lakes are salt lakes, and their color can vary due to the salt content in them at any given time. Pink Lake has lost much of its pink color due to a reduced amount of salt in it right now. The lake’s waters were visibly pink in years past, but it has not been rosy since 2017. The concentration of salt in the lake is essential to the pink color and, if the salt conditions alter, Pink Lake could turn pink again. The lake is located approximately 2 miles south of Esperance, in Western Australia.

Pink lakes are rare, and there aren’t that many of them in the world, and Australia seems to have the lion’s share of them. There are some in California and the Great Salt Lake has pink hues as well. A pink lake is a lake that has a red or pink color. This is often caused by the presence of algae that produces carotenoids, such as Dunaliella salina. Dunaliella salina is a type of halophile green micro-algae especially found in sea salt fields. Dunaliella salina is known for its antioxidant activity because of its ability to create large amount of carotenoids. It is actually used in cosmetics and dietary supplements. Few organisms can survive like Dunaliella salina thrives in such highly saline conditions as salt evaporation ponds.

There are also rose rivers and rose beaches, in which the same compounds exist. It’s very complicated the dynamics of why a river turns rose. The pond color may be affected by external modifications and climate circumstances. The Pink Lake of Esperance has lost its blue color owing to modifications in the salinity resulting from human activities. Whatever the cause of these pink lakes, rivers, and beaches, they are a very unique phenomena, and one that I wouldn’t mind visiting.