duke and duchess of cambridge 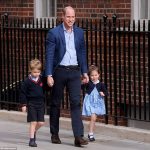 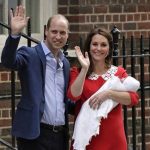 The long awaited birth of the third child of the Duke and Duchess of Cambridge has finally arrived. It’s a prince. I am so excited to have a new royal cousin…my 16th cousin twice removed to be exact. Of course, we don’t know the baby boy’s name yet but he weighed in at 8 pounds 7 ounces, so he was a good sized boy. He is just perfect. It is always so exciting with one of my royal cousins has a new baby. There has been much speculation as to what the couple might name the little prince, with names like James, Phillip, and Arthur. The bookies have started the betting process, so everyone can be involved, Personally I like the names Michael, Phillip and Spencer. In fact I would like a some version of the three together. Time will tell, and until William and Kate inform the Queen of the name, no one else will get to know what it is, but from what I’ve read, the Queen will have no say in the baby’s name. As a grandmother, and soon-to-be great grandmother myself, while I have my own ideas about good baby names, I do not think it is my place to try to force my opinion, and in fact, when I have thought a name would not be the best on for the babies in my family, I have found out that each of their names seem to fit them perfectly. That said, no matter what the name is, it should be totally the decision of William and Kate. We just wish they would hurry up and tell us already!!

With the birth of this baby boy, history will be made again. This new baby will be 5th in line to the throne of England, following his grandpa, Prince Charles; his dad, Prince William; his brother, Prince George; and his sister, Princess Charlotte. In times past, Charlotte would have fallen after this new baby, but the law changed before her birth, and she now holds her line in the succession to the throne. Many people are not sure how they feel about that, but since her great grandmother, Queen Elizabeth has successfully ruled England for many years, it would be hard to dispute Princess Charlotte’s ability should that position ever arise. This baby also moves Prince Harry, William’s brother, to 6th place in the line of succession, which pretty much guarantees that he will never be the King of England, unless something huge happens, which I pray it never does…obviously. 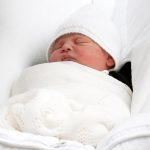 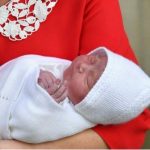 So, as an eventful first day of life comes to an end for the little prince, who was born of Saint George’s Day, a big holiday in England, we go to sleep still wondering what this little man will be named. Not that he really cares either way right now. After all, he has had a busy day, and all he really wants is dinner and a soft bed. Happy birthday sweet little HRH Prince of Cambridge, which is his official title. We look forward to knowing your name very soon. Congratulations to the Duke and Duchess of Cambridge. We are so happy for you!!