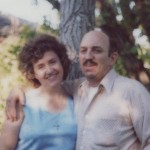 When my mom first saw my dad, she tells me that her heart skipped a beat, and she thought, “Whew, what a handsome man!” My dad must have had similar thoughts because that began a lifelong marriage. They lived happily ever after. That might sound like the whole story, but it is only the beginning. From the moment they had their first date, my dad treated my mom like a princess. He planned to win her love and then spend the rest of his life loving her and giving her everything he could. That was a dream that would never change.

As the years went by, and their 5 daughters arrived, the love multiplied. Our family was always close…it was planned that way by my parents. When they married, it was forever. Their love would always be put first. They always treated each other like royalty. To them, their spouse was the most important person in the world…and their children a close second. Theirs was a match made in heaven.

I never saw my mom happier than when she was with my dad. Her eyes sparkled and her smile was brighter. Dad had a way of making her feel prettier…a condition that comes from being treated like a princess. And truly when he was around, she glowed. Could love possibly be stronger than that. There is just something about spending your life around a person who has the ability to make you feel better about yourself, that gives life a greater meaning. And my dad had that ability…with all his girls. He made you feel like you could be more, do more…like you were more than you thought.

Whenever any of us had a problem, Dad always had a way of working it out, and that is how he always was. I could see that in his letters to his family during World War II, and he carried that same ability with him throughout his entire life. I suppose it was that ability 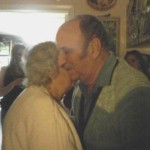 that always made him seem like a knight in shining armor to my mom. She always knew that Dad would work out any problem they might encounter. Don’t get me wrong, mom was quite capable too, but Dad always had a plan…no matter what the problem.

I have been around many married couples, but none that were ever quite like my parents. Theirs was a love that was unmatched. Sometimes love is like that. They fell in love at first sight and loved forever after that day. How blessed their lives were, and how blessed were the lives of their children and grandchildren.