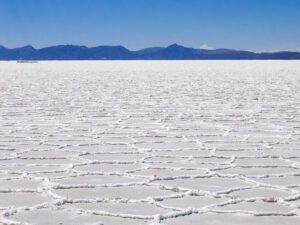 Salar de Uyuni (or Salar de Tunupa) is not a place that most of us living in the United States would have heard of, unless we are a world traveler or an avid travel reader, that is. Salar de Uyuni is the world’s largest salt flat, or playa, at over 3,900 square miles in area. A playa is defined as a the flat-floored bottom of an undrained desert basin that becomes at times a shallow lake. Salar de Uyuni is in the Daniel Campos Province in Potosí in southwest Bolivia, probable the main reason we may not have heard of it before. Salar is near the crest of the Andes at an elevation of 11,995 feet above sea level.

The Salar de Uyuni is a strange, sometimes lake/sometimes desert that was formed as a result of transformations between several prehistoric lakes that existed around forty thousand years ago, but had all evaporated over time. The area has a large salt content, creating a flat that is now 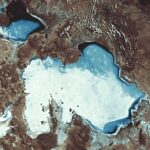 covered by a few meters of salt crust. The area is amazingly flat with the average elevation variations within one meter over the entire area of the Salar. The crust serves as a source of salt and covers a pool of brine, which is exceptionally rich in lithium. The large area, clear skies, and exceptional flatness of the surface make the Salar de Uyuni ideal for calibrating the altimeters of Earth observation satellites. After it rains in the area, a thin layer of dead calm water transforms the flat into the world’s largest mirror, 80 miles across. Many people have photographed its amazing picturesque views.

The Salar is a prime breeding ground for several species of Flamingos, and also serves as the major transport route across the Bolivian Altiplano. Salar de Uyuni is also a climatological transitional zone since the towering tropical cumulus congestus and cumulonimbus incus clouds that form in the eastern part of the salt flat during the summer cannot permeate beyond its drier western edges, near the Chilean border and the Atacama Desert. 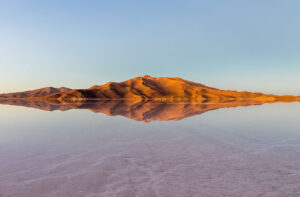 During the dry season, the water on the playa dries up, and forms crystalline formations as the salt dries out. During the wet season it becomes a shallow lake that reflects the sky beautifully.

“Salar means salt flat in Spanish. Uyuni originates from the Aymara language and means a pen (enclosure); Uyuni is a surname and the name of a town that serves as a gateway for tourists visiting the Salar. Thus Salar de Uyuni can be loosely translated as a salt flat with enclosures, the latter possibly referring to the “islands” of the Salar; or as “salt-flat at Uyuni (the town named ‘pen for animals’)”.