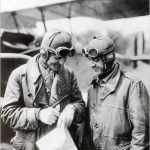 Since people began moving around the world there was a need for mail service, but people hated to wait months to hear from their loved ones…especially if it was with bad news. There had to be a way to get he mail faster and with the invention of the airplane, in late 1903, the possibility of a new way to deliver the mail was on the horizon. It really didn’t take very long for someone to make the metal leap from driving the mail to flying the mail from place to place. Where there is a need, there must be a solution. That solution came on May 15, 1918, when the United States officially established airmail service between New York and Washington DC, using Army aircraft and pilots. Prior to this date, the Post Office Department used new transportation systems such as railroads or steamboats to transport mail. They contracted with the owners of the lines to carry the mail. There were no commercial airlines to contract with, so no one had thought about that yet, but that was about to change.

Army Major Reuben H. Fleet was charged with setting up the first US airmail service, scheduled to operate beginning May 15, 1918 between Washington DC, Philadelphia, Pennsylvania, and New York City. The army pilots chosen to fly that day were Lieutenants Howard Culver, Torrey Webb, Walter Miller and Stephen Bonsal, all chosen by Major Fleet, and Lieutenants James Edgerton and George Boyle, both chosen by postal officials. Edgerton and Boyle had only recently graduated from the flight school at Ellington Field, Texas and neither had more than 60 hours of piloting time. While I’m sure the were a bit nervous, I’m also sure they were excited to be standing on the threshold of history.

The project got off to a bit of an embarrassingly rocky start, when Lieutenant Boyle, who was engaged to the daughter of Interstate Commerce Commissioner Charles McChord, was selected to pilot the first plane out of Washington DC that day. After all his preparations, Boyle hopped into his plane and was unable to start it. The plane had not been fueled. I’m sure that added a bit of nervousness to the situation. Nevertheless, he finally got his Curtiss Jenny, loaded with 124 pounds of airmail, into the air and made his way to Washington DC. His assignment was to fly to Philadelphia, the mid-way stop between the Washington and New York ends of the service. He did not make it there that day. The novice pilot got lost and low on gas, crash landed in rural Maryland, less than 25 miles away from Washington.

Fortunately for the service, the other flights operated as scheduled that day. Thanks to his political connections, Lieutenant Boyle was given a second chance to fly the airmail out of Washington DC. This time, he was given an escort who flew him out of the city, having given him directions to “follow the Chesapeake Bay” towards Philadelphia. Unfortunately, Boyle followed those instructions too literally, following the curve of the bay over to Maryland’s eastern shore, where he landed, out of fuel again. Not even Boyle’s connections could help him now, and he was removed from the pilots list for the service. I’m sure that didn’t help his standing with his future father-in-law either.

The other rookie pilot, Lieutenant James Edgerton, did much better on his flights and stayed with the service. Edgerton managed to keep his plane aloft during a violent storm that struck while he was on another flight, even as the propeller was pelted by hail. He stayed with the mail service until the next year, and became the Chief of Flying Operations. Then in August, the Post Office Department took over airmail operations with airplanes and civilian pilots of its own. Captain Benjamin Lipsner was named the first superintendent of the U.S. Airmail Service.

The first flight operated by the Post Office Department took off from College Park, Maryland, on August 12, 1918. The destination was New York. Max Miller flew that historic flight. Miller flew the new Curtiss R-4 aircraft. These new planes had more powerful Liberty 400 horsepower engines. Miller was the first pilot hired by the Post Office Department. He died when his plane caught fire and crashed on September 1, 1920. The Post Office Department decided to launch pathfinding flights from New York to Chicago in September 1918. A major obstacle was the Allegheny Mountains, considered by some to be the most dangerous territory on the route. U.S. Airmail Service Superintendent Benjamin Lipsner chose two of his best pilots, Eddie Gardner and Max Miller, for these flights. Eager competitors, Gardner and Miller turned the test into a race. On September 5, 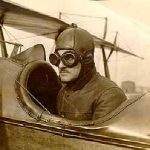 1918, the pair left New York. Miller flew in a Standard airmail plane with a 150-horsepower Hispano-Suiza engine. Gardner followed in a Curtiss R-4 with a 400-horsepower Liberty engine and was accompanied by Eddie Radel, a mechanic. As each pilot landed to refuel or make repairs, he eagerly called Lipsner in Chicago to find out where the other one was. A set of telegrams now in the National Postal Museum tracked their progress. Miller landed in Chicago first, at 6:55 p.m. on September 6. Gardner arrived the next morning, landing at 8:17 at Grant Park. Sometimes it isn’t about the size of the engine I guess. Of course, today, very few people use the postal service, not called “snail mail.” With the internet and texting we have almost instant access to our loved ones.