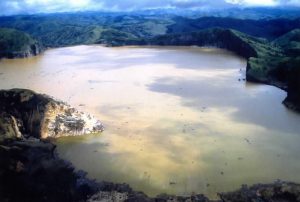 We have all heard about volcanic eruptions, seen photos or video of one, or maybe even seen one in person. They are an event that makes it hard to take your eyes off of the scene. There are volcanos that erupt often, and there are those that haven’t erupted in hundreds of years. And, there are volcanos that erupt under the ocean. But…there is a rare type of eruption, that is, in fact so rare that it has only been observed twice, although it may have happened elsewhere. It is called a Limnic Eruption.

A limnic eruption, also called a lake overturn, is a rare type of natural disaster in which dissolved carbon dioxide (CO2) gas suddenly erupts from deep lake waters. The eruption forms a gas cloud that can suffocate wildlife, livestock, and humans. It can also cause tsunamis in the lake as the rising CO2 displaces the water. Scientists believe earthquakes, volcanic activity, or explosions can be a trigger for such an explosion. Lakes in which limnic activity occurs are known as limnically active lakes or exploding lakes. Some clues as to limnically active lakes include: CO2 saturated incoming water, a cool lake bottom indicating an absence of direct volcanic interaction with lake waters, an upper and lower thermal layer with differing CO2 saturations, and proximity to areas with volcanic activity, all of which are possible indicators of a limnic lake. 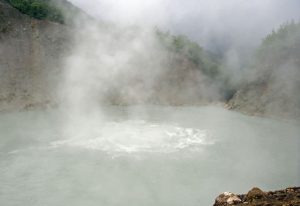 After a Limnic explosion the water left in the lake is filled with debris and massive amounts of dissolved CO2. To date, this phenomenon has been observed only twice. The first was in Cameroon at Lake Monoun in 1984, causing the asphyxiation and death of 38 people living nearby. A second, deadlier eruption happened at neighboring Lake Nyos in 1986, this time releasing over 80 million cubic meters of CO2 and killing around 1,700 people and 3,500 livestock, again by asphyxiation. When the explosion occurred in Lake Nyos, a geyser of water shot out of the lake reaching a height of 300 feet. A small tsunami rushed over the land, followed by a carbon dioxide blast that asphyxiated people up to 15 miles away. Scientists believe limnic explosions are caused by pockets of magma under lakes, which leak and cause carbonic acid to form. In an effort to prevent future explosions, degassing tubes were installed in Lake Nyos to allow the gas to leak at a safe rates.

A third lake, Lake Kivu, on the border between the Democratic Republic of the Congo and Rwanda, also contains massive amounts of dissolved CO2, and it is believed that Limnic eruptions have occurred there too. 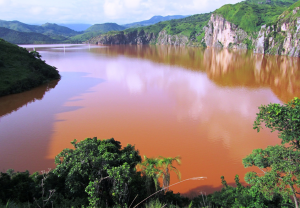 Sample sediments from the lake were taken by professor Robert Hecky from the University of Michigan, which showed that an event caused living creatures in the lake to go extinct approximately every thousand years, and caused nearby vegetation to be swept back into the lake. Limnic eruptions can be measured on a scale using the concentration of CO2 in the surrounding area. Due to the nature of the event, it is hard to determine if limnic eruptions have happened elsewhere. The Messel pit fossil deposits of Messel, Germany, also show evidence of a limnic eruption there. Among the victims of that eruption are perfectly preserved insects, frogs, turtles, crocodiles, birds, anteaters, insectivores, early primates and paleotheres.