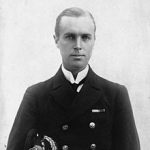 During World War I, airplanes were just in their infancy. The senior officers on all sides doubted the usefulness of “air machines” in warfare. Of course, history tells us that they were very wrong…in more ways than one. Of course, war planes have been winning battles for over a hundred years, but planes can do so much more, and in more areas than just wars, but that’s another story. This story is about how “air machines” changed the face of World War I. Of course, the planes did things like spying on the enemy and the same things we all would expect for planes and their pilots, but one pilot made a daring rescue that would be one for the history books.

In the early days of the war, Squadron Commander Richard Bell Davies and Flight Lieutenant Richard Peirse carried out a number of raids on German submarine bases at Ostend and Zeebrugge. Both were awarded the Distinguished Service Order for services rendered in the aerial attack on Dunkirk on January 23, 1915. These men repeatedly attacked the German submarine station at Ostend and Zeebrugge, being subjected on each occasion to heavy and accurate fire, their machines being frequently hit. In particular, on January 23rd, they each discharged eight bombs in an attack upon submarines alongside the mole at Zeebrugge, flying down to close range. At the outset of this flight, Lieutenant Davies was 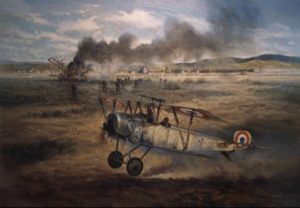 severely wounded by a bullet in the thigh, but nevertheless he accomplished his task, handling his machine for an hour with great skill in spite of pain and loss of blood. But this would not be the mission he was most remembered for.

On November 19, 1915, Richard Bell Davies showed his true worth when, in one of the most exciting episodes of the air war during World War I, he performed a daring rescue. As squadron commander in the Royal Naval Air Service, Davies was flying alongside Flight Sub-Lieutenant Gilbert F Smylie on a bombing mission. Their target for the day was the railway junction at Ferrijik, located near the Aegean Sea and the border between Bulgaria and Ottoman-controlled Europe. Suddenly, Smylie’s plane was hit by Turkish anti-aircraft fire, and he was forced to land. As he made his way to the ground, Smylie was able to release all his bombs but one before making a safe landing behind enemy lines. Smylie was then unable to restart his plane and immediately set fire to the aircraft in order to disable it.

Davies observed his comrade’s situation from the air and quickly moved to land his own plane nearby. Seeing Davies coming to his rescue and fearing the remaining bomb on his plane would explode, injuring or killing 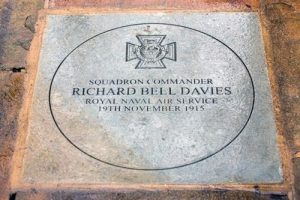 them both, Smylie quickly took aim at his machine with his revolver and fired, exploding the bomb safely just before Davies came within its reach. Davies then rushed to grab hold of Smylie, hauling him on board his aircraft just as a group of Turkish soldiers approached. Before the Turks could reach them, Davies took off, flying himself and Smylie to safety behind British lines. The British government awarded him the Victoria Cross on January 1, 1916, for what they called a “feat of airmanship that can seldom have been equaled for skill and gallantry.” For Smylie, it was a daring rescue that he could never thank his commander enough for. The quick-thinking Smylie was rewarded as well. He received the Distinguished Service Cross.